In many ways, the choice of a calendar theme for “MouseAdventure 365,” our Fall 2013 event, was a reflection of the intense time crunch going on behind the scenes.

After we learned in August that the only date Disney had available for our fall event was September 29, we had just weeks to write, test, and print the game. Then we immediately jumped right into preparing for our two-day November Walt Disney World MouseAdventure event.

MouseAdventure 365 was not only based on a calendar, but actually used a custom MouseAdventure 2014 calendar designed by Joe Stevano and printed just for this event. Each team received one copy of the calendar to use during the game, and we were thrilled by the response the calendars elicited.

For this game, we created one set of quests, but offered teams the option to compete in either the Basic or Advanced division. This provided our Advanced players with all of the mind-twisting challenge they crave, while giving our Basic teams a wider selection of puzzles than they usually see in one game.

Our registration numbers far exceeded the capacity of the Paradise Pier Hotel ballroom, our home base for game day. To make room for everyone, we gathered the Basic teams in the ballroom for the usual pregame greeting and instruction, and sent the smaller group of Advanced teams to meet with event co-producer Joe Stevano at the picnic area for their pregame chat.

Once orientation was complete, all players went into Disneyland to receive their game packets, and the competition was officially underway. The game wrapped up at 4:00 p.m. for both divisions, though we allowed Basic players to opt out of competition and take an extra hour to complete more quests if they wanted.

While the crack grading team worked to score all of the answer sheets, teams gathered back in the Paradise Pier ballroom for our new post-event snack break and a chat with the event producers.

We asked teams questions about things found in and around Critter Country, and provided them with sheets of paper printed with colored 3×3 grids. After answering each question, teams were instructed to cut the corresponding colored grid in a certain manner to create Tetris-like puzzle pieces. When properly arranged, the pieces formed the shape of a calendar month, and the letters printed on the pieces, read in the correct order, formed this question:

“Explorer Canoe Hours Today Are What?”

Very few teams tackled this Downtown Disney quest, but those that did generally received full credit. We covered the letters in Downtown Disney signs with images of candy conversation hearts, and asked teams to use the missing letters to solve one of Joe’s infamous “bubble up” puzzles. The result formed the phrase: “They are a tribute to Frontierland.”

Building on the theme of “transformation” as it relates to New Orleans Square establishments, we gave teams the phrase “Dream Suite,” and directed them to “transform” that phrase into another familiar location name by answering a series of questions in and around New Orleans Square.

The end result read “YRELLAGYENSID,” which, transformed once more by reading from right to left, spelled “Disney Gallery.” We asked teams for the name of the street where this location could be found in Disneyland.

This quest was once of several in which Basic and Advanced teams received different instructions to make the puzzle more challenging for our more experienced players. Joe used his amazing graphics skills to “decorate” a page of Easter eggs with designs and patterns taken from Toontown buildings.

Teams were instructed to locate the building represented by each egg, and use the indicated letter from each establishment name to form another Toontown location.

Basic teams had a much easier time because their Easter eggs were printed in order so that the phrase could be read from left to right once solved. Advanced teams weren’t as lucky, and were directed to unscramble the letters to reveal the location: Minnie’s Backyard.

For their final question, teams were asked what was “served” at that location. Where Minnie’s wishing well once stood is now a PhotoPass photo backdrop of a tea party.

We asked teams to answer a series of true/false questions in Fantasyland, then re-create a game of Mother May I using the answers provided by Mickey and friends. For the final question, we asked which character crossed the drawbridge first.

Flag Day asked teams to take a top-down view of the flags of Frontierland to solve a word problem. We provided teams with descriptions of 19 flags and a graphical representation of Frontierland, and asked them to connect the dots from one flag to the next.

As they completed the puzzle, the connecting lines crossed over words printed in the center of the map. When navigated successfully, the grid revealed the question: “In the year seventeen seventy five, who carried the famous rattlesnake flag with the motto don’t tread on me?”

Everyone knows that the 4th (letter) of July is “y,” and we asked the teams to use the same method of indexing to solve this quest. We provided teams with descriptions leading to specific words up and down Main Street, and directed them to use the indicated letter from each word to form the phrase: “Home town fare”

August – MouseAdventure Half Marathon (up to 91 points)

Some people claim that playing MouseAdventure is similar to running a half-marathon, so we decided to put that claim to the test for our August quest, which commemorated the Disneyland Half Marathon held every Labor Day weekend.

Teams began the half-marathon by having their team photo taken by a PhotoPass photographer, then exchanging their PhotoPass card for their “Mile 1” clue card. After they returned to the half-marathon station with the correct answer to that question, they received their “Mile 2” clue card, and so on. Each question was worth points equal to that “mile,” so the point values started small but teams had to potential to earn up to 91 points by correctly completing all 13 “miles.”

For some teams, this was the only quest they attempted during MouseAdventure 365, and they seemed pleased to accomplish this much. For other teams, success in the Half Marathon quest made all the difference when it came time to announce the winners.

In addition to providing a year full of fond memories with every new month, the MouseAdventure 2014 calendar also contained the Eye Spies for this event.

Rather than asking teams to simply identify the location each photo was taken, we asked a question about the images. The months and the corresponding answers were:

We sent teams on a grand circle tour aboard the Disneyland Limited to count things that can be seen from the train, like crates of fireworks and barrels of pickles. Upon completing the journey, teams used the numbers to decode a word puzzle to yield this final question:

“Date on the plaque at the base of the town square flagpole.”

The premise of this quest was that different residents of Disneyland use different calendars, each with a different number of months and different start dates. They also observe different holidays on different dates (hence the name of the quest, which drew on the fact that some states honor Abraham Lincoln in November instead of February).

We provided teams with copies of these two (fictional) Disney calendars, and asked them to convert a series of dates from the modern calendar we use to the corresponding dates on the character calendars. Using a grid, teams then located specific words needed to form the final question: “According to a poster, children up to what age were invited to spend a few great moments with Mr. Lincoln?”

At the post-game recap, teams that correctly solved this challenge received a special button commemorating their achievement.

We sent teams to the Starcade in Tomorrowland to answers a series of multiple-choice questions about the arcade games found within. Each correct answer instructed the teams to fill in a particular color of “0” or “1” in a grid. When complete, the solid blocks revealed the final answer:

The hidden quest was printed right on the calendar every team received, but not a single team correctly solved it during the event. For those still trying to figure it out, here’s the solution: If you look closely at the block of text printed on each month, you’ll notice that most of the numbers are in italics. Use the numbers not in italics to index the name of the month, just as you did in the 4th of July quest. Read in order, the letters spell: “Number of teacups”

At this event, 3 Guys, a Girl and a Pizza Port earned MouseAdventure Masters status with their third first-place win, having won their division in the Spring 2013 and Spring 2010 events.

Club 34 joined the ranks of Masters Candidates (teams with two first-place wins under their belt), having also won the Family division at the Spring 2013 event. If they win another event in the Family division, they will be the second Family Masters team.

Masters team The New Orleans Squares was the only Masters team to compete in this event, and earned a total of 449 points.

Masters teams Simba’s Pride and The Metzger Family once again joined the MouseAdventure crew for this event, helping to write quests, beta test, and staff the event. 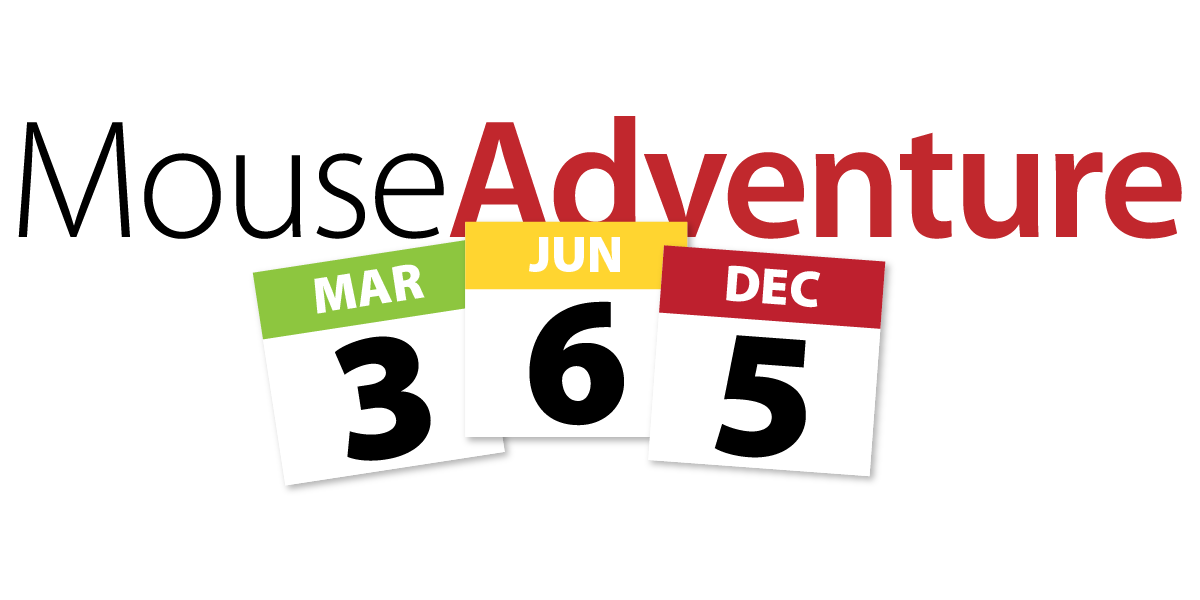