MouseAdventure returned to Walt Disney World on Saturday, October 9 for our second Florida event. Keeping with the “World Explorers” theme we adopted for our East Coast games, 32 “troops” consisting of a team of two to four players gathered outside Disney’s Animal Kingdom park at 7:00 in the morning on game day to size up the competition and wait for an escort into the still-closed park for a pre-game breakfast at Restaurantosaurus.

After taking a troop photo against the second-coolest backdrop we’ve ever used for event pictures (it would take a lot to beat Disneyland’s Cave of Wonders, used as the backdrop for our Advanced Division players during our anniversary event last spring), troops fueled up with a hearty spread of bagels, muffins, fresh fruit, and yogurt (our players apparently set a new Walt Disney World catering record for the amount of yogurt consumed by a group; the banquet managers said they’d never seen anything like it).

Having devoured a dinosaur-sized quantity of yogurt, troops gathered closer together inside the “mess hall” to listen to master of ceremonies Andrew Rich go over the rules and game play details. As with our first Walt Disney World event, troops received a “merit button” for each quest successfully completed during the event, and troop leaders were given a personalized MouseAdventure Merit Button sash to display their awards. After the troops recited their World Explorers Pledge and Disney gave the all-clear that the park was open for the day, we released the players into Animal Kingdom park to solve their first quest.

As troops left Restaurantosaurus, they received an envelope containing a park map and sheet of clear acetate film marked with a grid pattern. This turned out to be the troops’ first task: The Orienteering quest.

Troops first had to locate the store on Discovery Island where a quartet of animal heads in the shop’s intricate decor represent the four points on a compass. Then, they had to search the trails of Discovery Island to find the answers to a series of questions that would determine which direction they would move within the grid. After correctly answering the questions, Troops placed the clear grid over the park map to find their collection point.

This collection point would be critical for all troops, since only by correctly solving this quest could they identify which of two locations they had to proceed in order to pick up the rest of their game materials.

Players had to search around Harambe to match each company slogan or proprietor with the associated business. Correctly matching all of the pairs yielded a series of words that could be unscrambled to form a question.

The answer was located on the wall just to the right of the women’s bathroom in Harambe.

Troops rode Dinosaur, looking for words to complete a series of phrases. Select letters from each of those words were then used to spell the common name of a dinosaur, and the answer was the corresponding scientific (Latin) name for that dinosaur.

Troops received a set of stamp images featuring photos of real animals located in the Oasis.

Troops had to find the common (English) name of the animals, then use the letter indicated by each stamp’s value to unscramble a word. That word was unique to one animal in the Oasis, and troops had to identify that animal for their final answer.

Troops rode the Kilimanjaro Safaris, where they had to use the animal names on the animal spotting guides located in each vehicle to eliminate words from two word search grids; one for birds, and one for beasts. The remaining letters from both grids spelled out a question.

The Animal Science quest also contained the hidden quest, which was written backwards in the unused letters at the end of the beast word search grid. The hidden quest was worth an additional 20 points.

To earn this badge, troops had to walk the Maharajah Jungle Trek to the bird exhibit. Troops had to locate the gallery of bird photos arranged in the same pattern as the grid provided, then using the laminated “Birds of the Royal Forest” guides, cross out words from the grid that corresponded to gallery photos of birds found on the guide.

Those words that were crossed out were then used to form a question.

Troops located the missing words from sets located around the Asia portion of Animal Kingdom, then used those words to eliminate letters from those provided. The remaining letters unscrambled to form a word, and the answer to the quest were the other two words or phrases that completed that set.

Troops were provided with a small plastic magnifying glass, which came in handy on this challenge. A series of questions from the attraction “It’s Tough To Be a Bug” was presented, along with a small grid of bug icons.

Each question had similar bug icons, and when answered, the icon of the correct answer was filled in on the grid. Once all the bugs were filled in, a question was revealed.

This quest took troops on a trek along the Pangani Forest Trail to find the answers to a series of questions based on signs and other objects found along the way. When written into the spaces provided, the highlighted words spelled out a question that could be answered by visiting the Harambe School.

Arts and Crafts (40 points, minus 5 for each incorrect bead, minimum of zero)

Who doesn’t love a plastic bead key chain? This quest led troops to Camp Minnie Mickey for the Festival of the Lion King show. A series of questions about the show indicated which bead to select for the key chain, paying special attention to the size of beads as well as the shape.

A bonus quest worth 20 points was offered for troops that wanted to do a square stitch lanyard in addition to their key chain.

Troops were sent to DinoLand in search of specific license plates in the Dino-Rama planter located next to TriceraTop Spin. The phrase was copied into the provided space, and as license plates were found in order, the letters below the symbol or letter where the plate was found were used to spell out a question that would be answered by searching behind Chester and Hester’s Dinosaur Treasures.

Disney landscapers made this quest a little more difficult than we had intended when they added several inches of additional gravel to the planter after the quest had been written, covering more letters than were previously visible.

Ever notice all the Swahili words used around the Africa section of Animal Kingdom? Troops were given a list of English words and phrases, then instructed to search for their Swahili equivalents. Those Swahili words were then placed in a grid and the letters in the shaded squares were arranged in numerical order to form another Swahili word. Troops had to search for the price of the product that was named.

The answer was located in the Mombasa Marketplace, where items are arranged on shelves close to the ceiling.

Troops searched for the numbers in DinoLand that answered 12 questions. They then calculated for a three-digit number that was a date, expressed as million years ago, and were instructed to provide the date and name of the geologic period to which the date corresponded.

A geologic timeline located in the Dinosaur ride shop provided the key to this answer.

Each troop was provided with a small clip-on digital camera to photograph 12 specific subjects throughout the event. All members of a troop were required to be in the photo to receive credit, so the normal MouseAdventure rule against asking cast members or guests for help was suspended for this one quest.

We provided troops with 14 photos taken around Animal Kingdom and asked them to identify each photos; each correct answer was worth 5 points.

In a twist on the usual trivia, all the answers to this quest were located in the park, and answers could be found along the way as troops solved the various other quests.

The total possible score for this event was 670 points, including the hidden quest and the lanyard bonus.

After completing the Animal Kingdom event, 24 World Explorers flew to California to participate in our MouseAdventure Holiday: Trick or Treat event at Disneyland just 8 days later. Those players received an additional Coast to Coast Merit Button for their team’s sash, and also received an individual commemorative button. 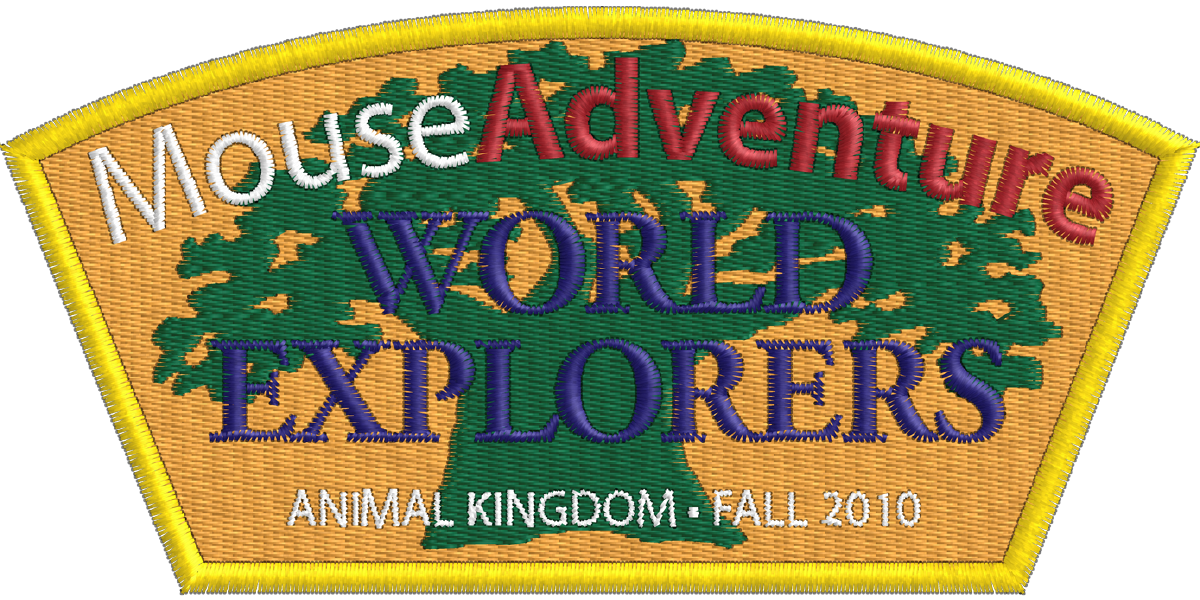