MouseAdventure traveled to Florida this Fall for MouseAdventure World Explorers: Epcot, our first-ever Walt Disney World event. Thirty-three brave and adventurous teams joined us for an event unlike any we’ve ever produced. Walt Disney World has so many more options for hosting special events, and we were thrilled to be able to actually begin the game inside Epcot Park, with breakfast and introductions at the Odyssey Restaurant on the border between Future World and World Showcase.

The theme of this event was World Explorers, and our teams – referred to as “troops” for the event – earned “merit badges” for each quest correctly solved. While troops fueled up for the day ahead, Master of Ceremonies Andrew Rich reviewed the rules and special instructions for this event. Keeping with (just-created) World Explorer tradition, each troop leader received a merit badge sash after breakfast, and led their troop in reciting the World Explorers Pledge before the start of competition:

I promise to do my best
To be observant and attentive,
To follow all the rules and play well with others,
To be polite and assist those not of my team,
To assume nothing, and question everything
For the World must be explored!

With that, we released the troops into Epcot park to solve their first quest. The event was divided into two portions, with troops solving a packet of quests in each Future World and World Showcase.

Before they received their Future World packet, troops had to first solve the Geotracking quest, which sent them on a hunt through the Leave a Legacy sculpture to find specific memory tiles. After locating the correct tiles, teams took a ride through the newly enhanced Spaceship Earth attraction, and used the results from the first part of the quest to make decisions during the interactive portion of the ride.

After troops watched the “Welcome to Your Future” video that was generated based on their responses, they had to answer a question about the video. This was the first of two locations where teams could earn bonus points by sending a photo of their team to us.

One team apparently broke a window in their future, but every other team answered the quest correctly.

To earn the fishing Merit Badge, troops had to explore The Seas with Nemo & Friends to search for words that had “floated away” from a series of provided photos. Once teams netted them all, they had to use those words to solve a word search puzzle to reveal the final question.

This quest was one of several in which knowledge of Epcot helped some teams, while knowledge of MouseAdventure helped others. The plaque that yielded the final answer is located at the exit to The Seas, and was hard for teams unfamiliar with Epcot to find. On the other hand, the word search asked for the year the society that gave the award was founded, NOT what year the award was given. Teams that solved the quest too hastily – and didn’t read the entire question – gave the wrong year. This error knocked one veteran team out of a final-three finish.

To earn the imagination Merit Badge, teams had to Journey Into Imagination With Figment and the The Kodak “What If” Labs to look for text that would complete a series of provided sets. Using their answers, teams uncovered another word, and had to find the two words that formed a set with that word.

A decal on the exit doors of the Kodak “What If” Labs yielded the final set, as did a lighted sign outside the store.

To earn the engineering Merit Badge, we sent teams on the ultimate Pinewood Car Derby experience – a trip around Test Track. Teams first had to search the test facility to collect numerical data, and after their ride solve a math equation. The result was the model number of a car in Goofy’s Dream Cars display inside the attraction’s gift shop.

To earn the stargazing Merit Badge, we sent troops to Mission: Space to find the series of quotes displayed on plaques around the attraction entrance. Teams used the name of the person who said each quote to solve a crossword puzzle, and then unscramble marked letters to form their final question.

Quite a number of teams walked right past the plaques, and rode Mission: Space trying to solve this quest, while others went directly into the Advanced Training Lab looking for clues. The answer to the quest could be found on a plaque in the cement outside the attraction; several teams walked right over the plaque while searching for the answer.

To earn the fire safety Merit Badge, troops had to locate a display of fire department patches inside Innoventions, and use the patches to solve a word puzzle. After decoding their final question, teams used a nearby computer database of fire department statistics to answer the question. We also offered teams the opportunity to earn bonus points by taking a photo of their team at the provided kiosk.

To earn the history Merit Badge, teams had to search the Inventor’s Circle and identify the discovery that was made in each year listed on the quest sheet, then use the name of each discovery to decode a hidden question.

This quest introduced a new puzzle type to MouseAdventure – indexing. Teams with a good knowledge of Epcot park were able to quickly locate the Inventor’s Circle, an often-overlooked installation in the walkway outside Innoventions

To earn the boating Merit Badge, troops had to take a short cruise with the Three Caballeros through the Mexico pavilion, and then answer a series of multiple-choice questions based on the ride. Upon returning to shore, teams followed the directions provided next to each answer to eliminate figures from the Animales Fantasticos exhibit. Completed correctly, only one figure would remain.

Some teams were able to answer the initial questions without even riding; others had to sail twice to find details they overlooked the first time. We requested the Spanish name of the remaining figure, but some teams provided the English name – and thus earned no points.

To earn the observation Merit Badge, troops used a provided (and completely made up) Chinese – English dictionary to decode a message found on the six columns in the courtyard of the China Pavilion.

Chinese characters are properly read from top to bottom and right to left, and so teams should have finished the translation directly in front of the sign that provided the final answer. Unfortunately some teams were distracted by other guests playing the Kim Possible game in the nearby area, and completely overlooked the hotel sign.

This quest was the first of three quests that could only be completed by one member of a troop. To earn the Decision Making badge, one player had to decide between “Sweet” and “Sour.” Players who opted for Sweet were sent via Friendship Boat to Club Cool, where they had to drink one shot of each Coca-Cola product offered – including the much-despised Beverly drink from Italy – before returning via boat to their teammates at the MouseAdventure station in the Germany pavilion. Players who opted for Sour were sent to the Summergarten Restaurant, where they were instructed to purchase and eat a side order of sauerkraut before rejoining their team. Regardless of the task chosen, the player had one hour to complete the task, and the rest of the troop could not leave the MouseAdventure station until their player returned.

The majority of teams chose Sour, and several players happily wolfed down their portion of sauerkraut in mere minutes. Others had more trouble finishing their plate, and returned to their team muttering threats and insults. The teams who opted for Sweet quickly discovered that the boat ride to and from Future World was time consuming, and at least one player found themselves parked in the middle of the lagoon as workers brought out equipment for that evening’s performance of Illuminations.

Every team that began this challenge finished within the time limit, though one team returned from the Sweet challenge with just minutes to spare. We had expected that at least one player might have trouble swallowing this quest, but we were surprised to find out that the only team to have intestinal trouble was a team that opted for the Sweet challenge. Some people just can’t hold their soda.

To earn forestry Merit Badge, we sent the troops to the forests of Japan to identify several species of plants and trees. Teams used these answers to solve a word puzzle.

This quest required teams to have a sharp eye, as the plaques that identify the trees and plants in the pavilion were often partially concealed by the plants.

To earn the geometry Merit Badge, troops had to search the winding streets of Morocco and find a tiled courtyard with a fountain and columns decorated with mosaic patterns. Using a provided diagram, teams had to match the colors in the mosaic patterns to letters in a grid to reveal their final question.

Some teams began to solve the puzzle using a similar – but incorrect – mosaic pattern on the fountain at the pavilion entrance.

To earn the art appreciation Merit Badge, troops had to search the art gallery exhibition posters in the France pavilion to determine which year certain exhibitions closed. Using this data, teams solved an elimination puzzle.

Teams that had the most problem with this quest did not find the fourth display of gallery posters, located in the gift shop at the back of the France pavilion.

Our second individual quest required one player from each troop to participate in a Memory game outside the United Kingdom Pavilion. While the rest of the troop waited, the chosen player had to match up a collection of pub coasters to reveal a hidden question.

This task was not difficult, but some teams found it very time consuming. Several players were seemingly so inspired by the subject matter that they purchased a cold beer from the nearby pub to enjoy while their teammate solved the puzzle. The British Invasion is a Beatles tribute band that performs in the United Kingdom pavilion, and a sign listing their performance times is centrally located in the pavilion.

The last individual quest – and the final quest of the event – required teams to choose one member of each troop to demonstrate their knowledge of the World. To earn the vexillology Merit Badge, that team member was given a modified map of Epcot, and had to put in order the flags of the countries represented in World Showcase. To make the challenge a little more difficult, flags from three countries NOT represented in World Showcase were included.

At the start of the event, teams received an “Errata” sheet listing the corrections and changes to the event that were discovered after the event materials were printed. Sharp-eyed teams spotted a series of numbers hidden in the event logo printed as a watermark on that sheet, and decoded a hidden question asking for the date Epcot opened. Though the park’s official opening date is October 1, 1982, a dedication plaque at the entrance to the park is dated October 24th. We accepted both dates.

480 points were possible in this event, including the hidden quest and the two opportunities to earn bonus points. Two teams correctly solved all quests and earned all bonus points, and so time was used as a tie breaker. MouseAdventure veterans Simba’s Pride turned in their answer sheet a full two hours and five minutes ahead of YM’s Majesty, earning them both a first-place victory and the honor of being named our fifth MouseAdventure Masters team.

MouseAdventure Masters are those teams who, on the occasion of their third first-place victory, are honored with retirement from competition. After retirement, the Masters teams are invited to participate in most MouseAdventure events at no charge, but may only compete in the super-difficult Invitational events. 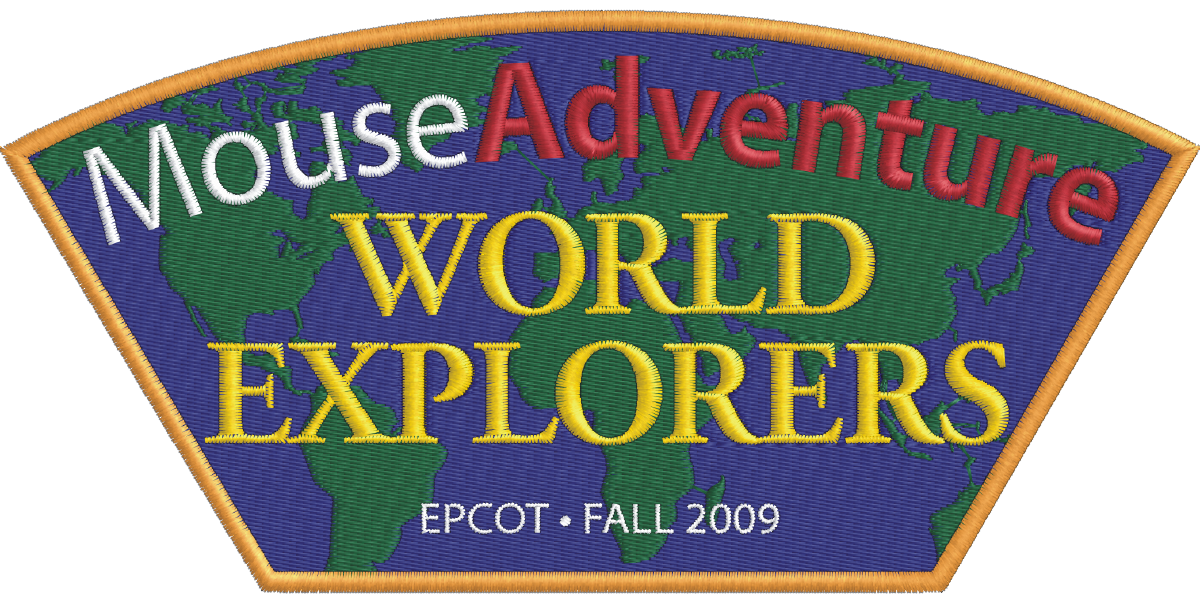