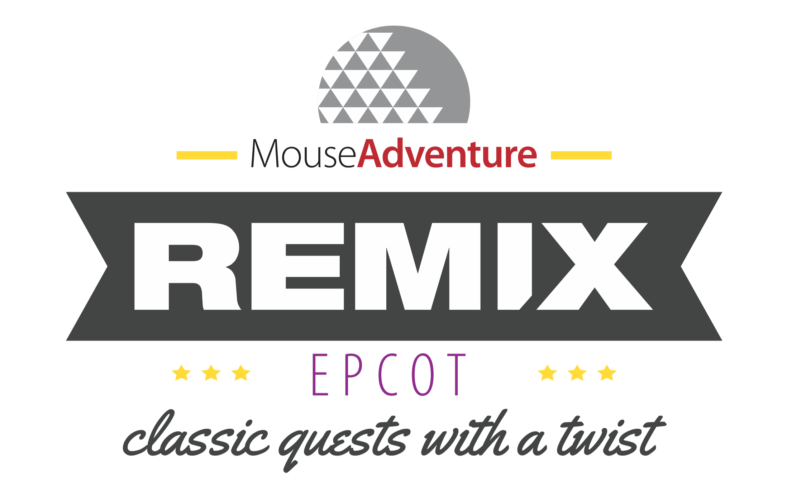 On November 10, 2018 the Third Gate Games crew hosted MouseAdventure Remix at Walt Disney World’s Epcot. This event marked the first time that a version of a “rewind” game was offered at Walt Disney World; quests from early Epcot MouseAdventure events were “remixed,” by updating the source data and changing out final answers. These reworked quests were joined by some new puzzles, and even a new meme or two.

Unlike most events where the game is written weeks beforehand, The Third Gate Games team worked feverishly in the days before to complete the game’s final elements. On the morning of the event, 56 teams gathered together at the Epcot Bus Terminal for sign in. After the customary orientation, game play, and rules presentation from Joe and David, Stephanie and Chris handed out the game packets. Teams headed into the park to tackle eleven quests and trivia around Future World and World Showcase amid the crowded walkways of the final weekend of the Food and Wine Festival.

Snack Mix (30 points)
Told to head for Japan, some teams were worried that they’d be stuck in the wonderful Kawaii exhibit for hours, only to find that they had to scour the entire pavilion for their answers. Looking through the gardens and exhibits, players then used letters from the words they wrote down to find the final answer, Shishinden, which translated into English means, “Hall of Ceremonies”

Mixico (30 points)
Sometimes MouseAdventure is all about bringing out the artistry in our players. The final answer for this quest required teams to locate and then draw a specific skull from a display in the Mexico pavilion.

Several teams were disturbed to enter deep into the pyramid and find a massive line snaking out into the lobby - only to discover that the tequila bar was having a particularly successful day. Players then hopped into boats on the Gran Fiesta Tour and paid close attention to answer a series of six questions. Upon leaving the ride and finding the skull wall, they used the directions from each answer to locate the correct skull. Final answer: 3 over and 4 down.

Morris Mélange (30 points)
Over in France, players searched fine art exhibition posters on the Morris columns to locate each source of a series of cropped images. Teams eliminated the exhibitions' closing dates from a selection of numbers to find the price of a specific menu item chez Monsieur Paul. Eliminating all the correct numbers left 2 and 9, combined for a cost of $29. The final answer is the oxtail soup (soupe aux truffes, V.G.A).

Spice Mix (30 points)
The Fez House in Morocco has an intricately tiled floor, walls, and columns. In this quest from the very first Florida-based MouseAdventure in 2009, players located a section of colored tiles from one of the columns that was a key to decode a final question: the Koutoubia Minaret was built during this Moroccan dynasty. The final answer, from a nearby plaque, was Almohades.

Mixed Messages (40 points)
Sent into China, teams had to wrestle with a language decode with a twist: as none of the MouseAdventure crew speak Mandarin, we just made up words to go with characters on columns, and provided the teams with our own "dictionary." When correctly translated, the question read:

According to the Disney Shanghai resort exhibit in the house of the whispering willows what colorful resident founded the port town of treasure cove and converted part of his family mansion into a theater? The final answer, found in the section on Treasure Cove, was Don Diego Sevilla Portilla.

Wintry Mix (40 points)
Visiting Our Friends From The North gave teams a welcome respite from the midday or mid-afternoon heat in the Circlevision 360 theater presentation of O Canada, featuring Martin Short. Similar to a previous quest involving France's Impressions de France attraction, players placed a sequence of twenty images from the movie in order as they appeared on screen.

Each image was accompanied by a two letter code, which then went into a grid on the front page of the quest. When read “correctly” (top to bottom, then left to right), the final question read: the French name of Canada’s The Mill Stage is what? Final answer: L’estrade du Moulin

Trail Mix (50 points)
Teams scoured Norway, China, Germany and Italy to answer a series of multiple choice questions whose answers corresponded to different sections of a maze. Teams used the correct answers to draw in the walls of a maze. Starting at W in the center, numbers along the path directed teams to move forward or back in the alphabet to form a final question: What location is the second directional sign from the top pointing toward? Combined with instructions providing information on the location of the sign at the Outpost, successful teams wrote Paris as their final answer.

Salad Mix (60 points)
Spread through the Seas, Land, and Imagination pavilions of Future World, teams located the missing piece of text from 12 items to fill in blanks on their quest page. For each answer, one or more letters were indicated with an icon that was also provided in a grid.

Once all the icons in the grid were replaced with letters, teams decoded a series of coordinates using the lettered grid to come up with the question: what is Louis Pasteur credited with inventing in 1862? The final answer is engraved in the ground at the Inventors Circle between the Innoventions West pavilion and the Land: Germ theory of disease.

Cement Mix (60 points)
For this quest, teams were given the final question right up front: What is the quote on Javier Libre's tile? They were also given the location of the answer: Leave a Legacy. However, without a more specific location, finding the answer would take quite a lot of time. Instead, a series of pictured letters provided an important clue to that location.

Searching the east side of Future World, teams located the pictured letters from a selection of prominent (and not so prominent) signage. Once they identified the correct sign, a number and arrow above the image instructed them to move forward or backward in the sign's word to locate the correct letter for the final clue. Once all the data had been collected, the clue read: east four g eight. Javier Libre’s tile in Leave a Legacy on panel East-4-G-8 contains the quote: May the force be with you.

Awesome Mix (5 points each)
Best intro ever: As we all now know, Peter Quill visited Epcot as a kid; we even have photographic proof! Besides the iconic photo in front of Spaceship Earth, Peter posed for a plethora of photos around Future World. Unfortunately, he was standing of front of information you need. Find where Peter posed for the pictures below and write the information requested in the lettered spaces provided on your answer sheet.

Teams answered questions about ten items that Peter was photographed in front of throughout Future World.

Mix Master (5 points each)
To complement Peter Quill in Future World, the eye spy for World Showcase found Walt Disney standing in various locations around the pavilions. Teams answered questions about the items Walt was photographed in front of to receive credit.

Please take our brief survey to let us know how you heard about our game, and what you thought of it. If you don't mind us contacting you to get more details, there's also an option for you to share your e-mail address with us.

Full results are available on the MouseAdventure website. The total possible points for this game was 520.

The best new team (not otherwise placing) was Lifetime Journeyers with 485 points, who placed fifth in their first game! There were not enough teams to make a full family division for this game, but the highest scoring family team was Castaway Crew with 434 points.

The top 3 teams were:

A Masters team is a team that has placed first in 3 events, and has been retired from competition. Although not eligible for any prizes during non-Invitational MouseAdventure games, Masters teams return to set the bar for other teams to compete against. They play mainly for bragging rights and the thrill of the puzzle hunt.

Photo Contest Winners
Congratulations to the two winners of our #EpcotRemix photo contest: @Wrrubenstein on twitter (William Rubenstein) and @beccaslittleadventures on Instagram (Becca Jourdan). Players uploaded photos showing their MouseAdventure spirit to twitter and Instagram after turning in their answer sheets for a chance at a prize. 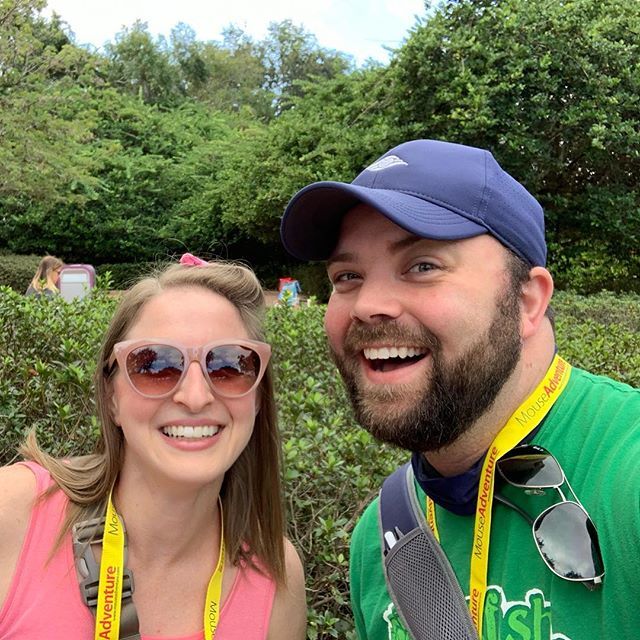 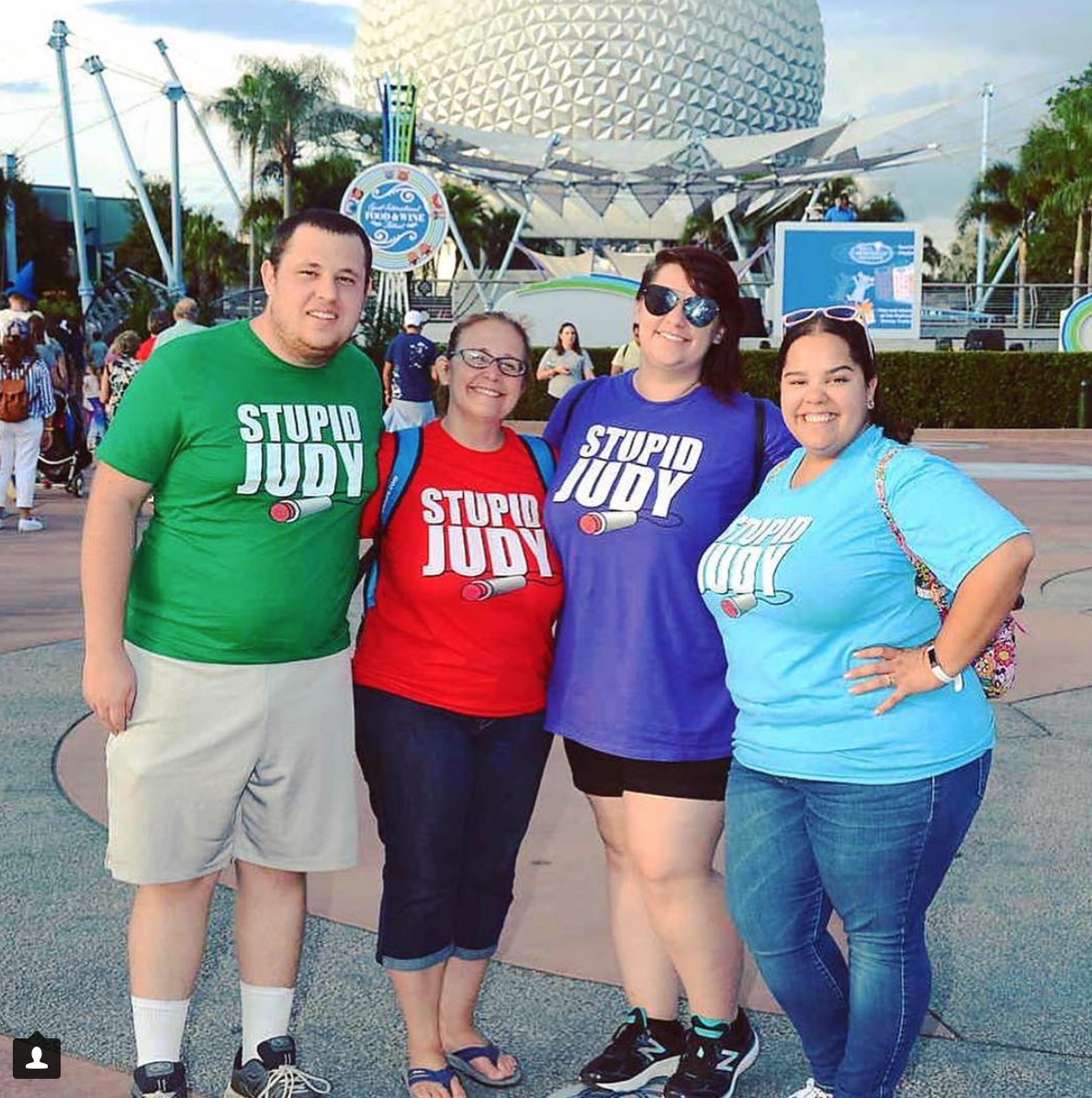 Handy links
This MouseAdventure was also brought to you via a lot of soft serve ice cream, some incredible cookies and a lot of laughter. If you'd like to look at the photos we took during the game, please go here.

Thank You!
Thanks to our awesome teams for coming out and playing the game. At this event, we had players from 12 different states. We'd also like to thank Tommy Metzger for writing the trivia.

Thanks to our media sponsor MousePlanet, your independent consumer guide to Disney travel and vacations, covering Disneyland, Walt Disney World and the Disney Cruise Line.