Third Gate Games returned to The Walt Disney Family Museum in San Francisco for an all-new set of challenges on February 23 and 24, 2019. Teams explored the galleries that were skipped over for the first MouseAdventure at the Museum to solve eight quests, locate 10 eye spy photos, and answer 30 trivia questions.

The day started in the lower lobby with check in and a brief presentation of the rules. Teams were scattered through the galleries to avoid crowding at the start, and were required to proceed through the museum in the forward direction throughout the event. Learning a lesson from the first museum event where many teams appeared to complete all quests before time was up, game time was shortened to increase the challenge for players.

A post-game briefing in the lower lobby bestowed prizes graciously donated by the museum on the top two teams for each day. Read below for a full synopsis of quests and answers.

Starting in Galleries 1a and 1b, players filled in the missing words to complete quotes from signage and large pull-quotes painted on the walls. The opening galleries give us a glimpse of Walt’s early life and beginnings in animation; it was our goal to have players search around and find out something new about Walt Disney that they did not know. Selected letters from the missing words spelled out the final question.

Throughout the museum, there are collections of Walt & Lillian’s family photos. In Gallery 2b, there are a selection of portraits of extended family, residences, and life events. Teams were given small sections of each photo, with a letter attached, and asked to locate that photo in a particular order.

The answer to this question was found in the upper portion of the marriage license facsimile presented as part of the display.

Proceeding on into Gallery 4, teams were confronted with audio visual kiosks that teach the nuances of adding sound to animated stories. After running though the four different activities, teams matched items on the left side of the paper from those activities with corresponding information on the right; straight lines between the correct answers passed through two words each to spell out the final question when read in order. Teams located the song sheet in the Snow White display cabinet, that had the same name as one of the four activities on the kiosks. The answer to that activity was the correct final answer.

The song sheet title fourth from top was, “With A Smile and A Song.”

In Gallery number 7, eagle-eyed teams scanned three different video screens across three walls of the room. Given stills from the video, with a selection of letters next to each picture, players had to put the pictures in chronological order, then transcribe the letters corresponding to each clip into a provided grid. Once the final question was complete, teams located the answer in a display case inside the gallery that is dedicated to the film 20,000 Leagues Under the Sea. 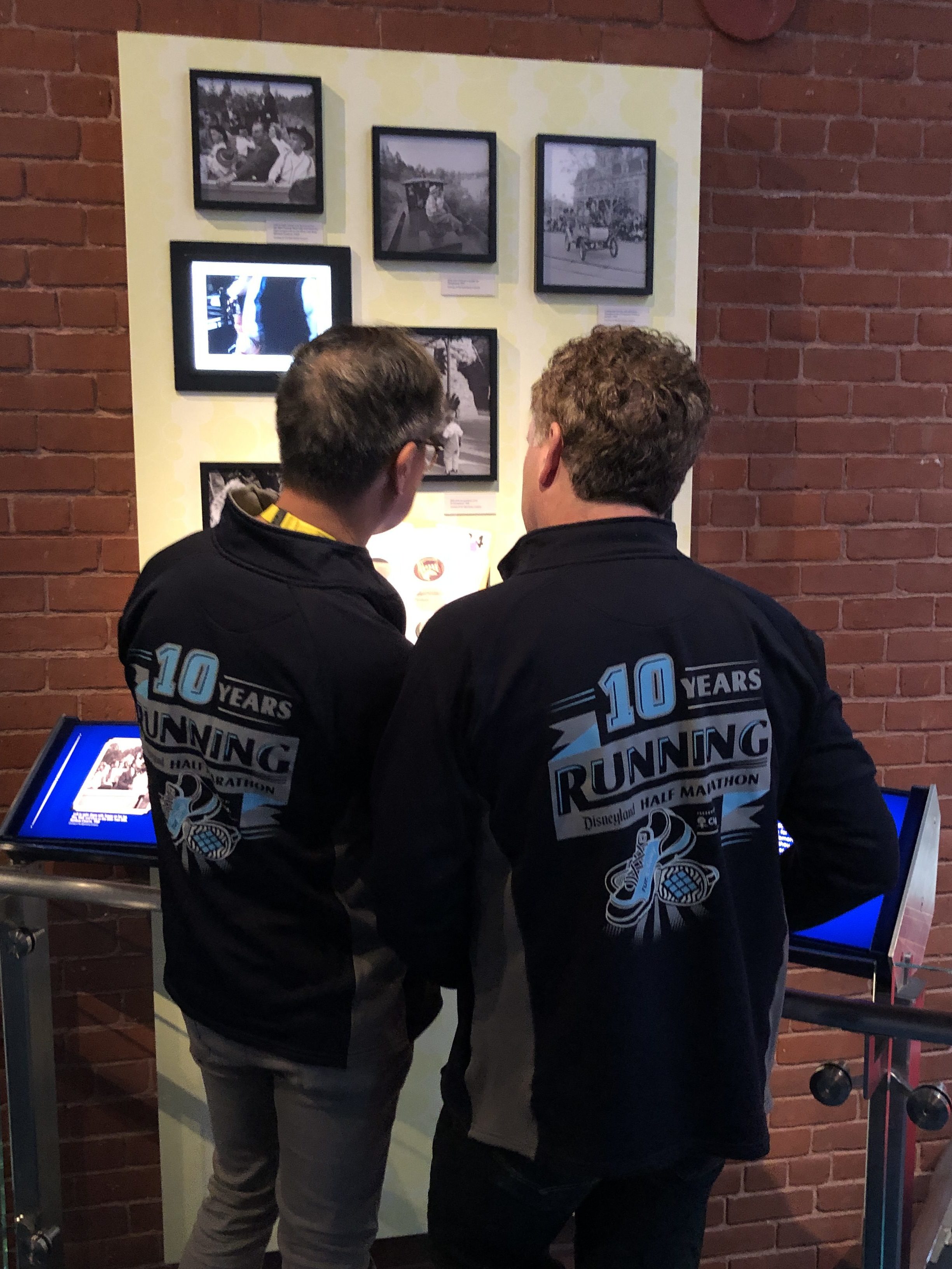 Small Words After All

A surprise break from all the entertainment items on display could be found (with a magnifying glass) in the next gallery, 7b. Walt’s amazing array of tiny items are displayed in cases, and teams looked for missing words from a variety of sources. Once teams located the items, they found the words again in a provided word search grid. The remaining letters, when read in a spiral from the outer edge inward, spelled out the final question.

The final answer was located on one of two invoices in the large display case in the middle of the gallery.

In gallery 9a, after the train, teams were presented with an algorithmic puzzle. Key numbers were removed from a series of small photos, and each photo was associated with a theme park icon. Teams located the numbers in the information and displays about the origins and early days of Disneyland, and then they did a little math. These numbers were translated to letters based on a straight alphabetic decode of A=1, B=2, etc. (as long as the value of the number was under 26).

The final answer was located on an original drawing of the Main Street frontage layout in a display case along the wall.

Fairest One of All

Galley 9b covers a variety of post-Disneyland projects that Walt was deeply involved in. The 1964 World’s Fair in Queens, NY featured the premiere of Great Moments with Mr Lincoln, the Carousel of Progress, and "it's a small world" that all went on to be installed at Disneyland. Players received a list of letters and numbers to decode for a final question. Each leading letter corresponded to the first initial of the speaker, either Walt Disney, Alice Davis, Marty Sklar, Don Edgren, or John Hench, who were all involved in the World's Fair projects. Teams used the two numbers after each letter to count into the quote the number of words, and then the number of letters within that word, respectively, to spell out the final question.

A display case in Gallery 9b contains a very interesting letter from WED Imagineering given to an employee to prepare him for a trip to the New York World's Fair. The document is packed with a treasure trove of historical details, including the final answer to this quest.

Let’s All Go To The Lobby

This quest used data from throughout the museum to present an additional challenge to teams. Individual letters from different movie posters were arranged to spell the words WALT DISNEY COMPANY. Upon finding each poster, players had to index the full and correct movie title according to the number given in the quest. Once decoded, the letters spelled out the final answer.

The final answer was on the large poster for 101 Dalmatians next to the cafe in the lobby. The title of the quest was a small hint to its location, where you would also be able to get yourself a treat.

Teams identified the missing words from ten pictures for the Eye Spy quest.

The subject of trivia can sometimes be a little divisive among MouseAdventure teams. Sometimes the winner of the game comes down to trivia scores. For this game, the top team rankings were not affected by trivia scores.

Full results for all teams are available on the MouseAdventure website. This game had a total of 415 possible points. 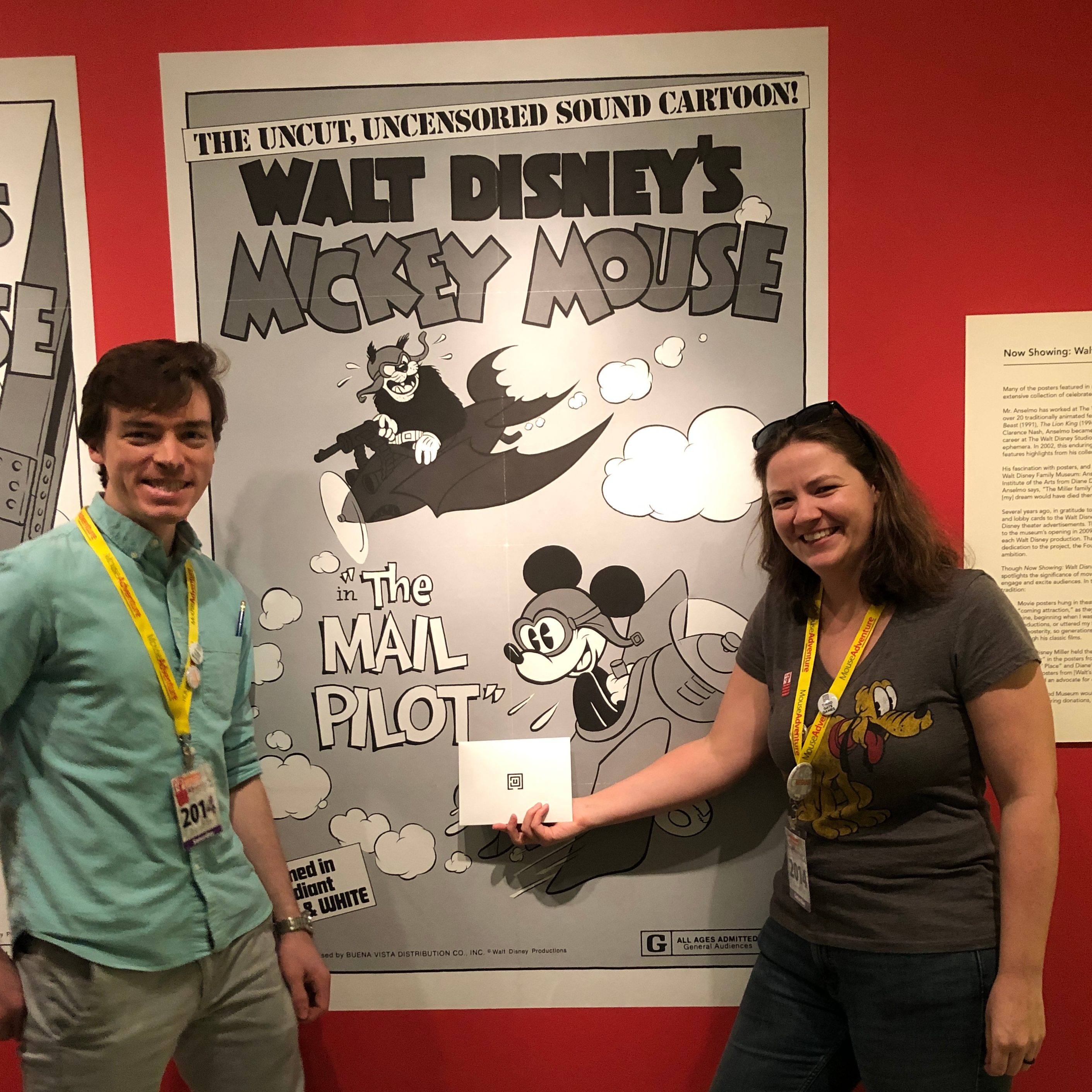 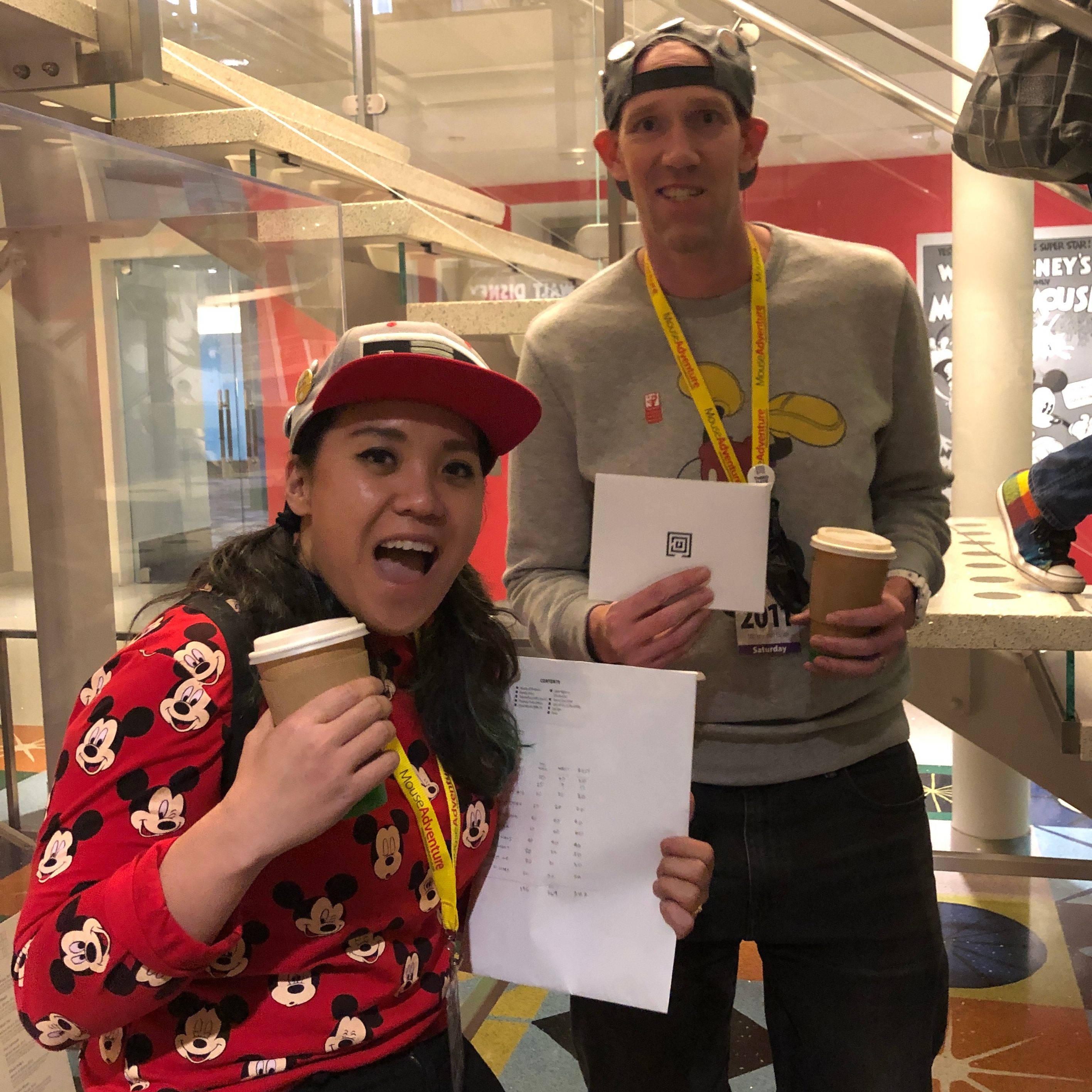 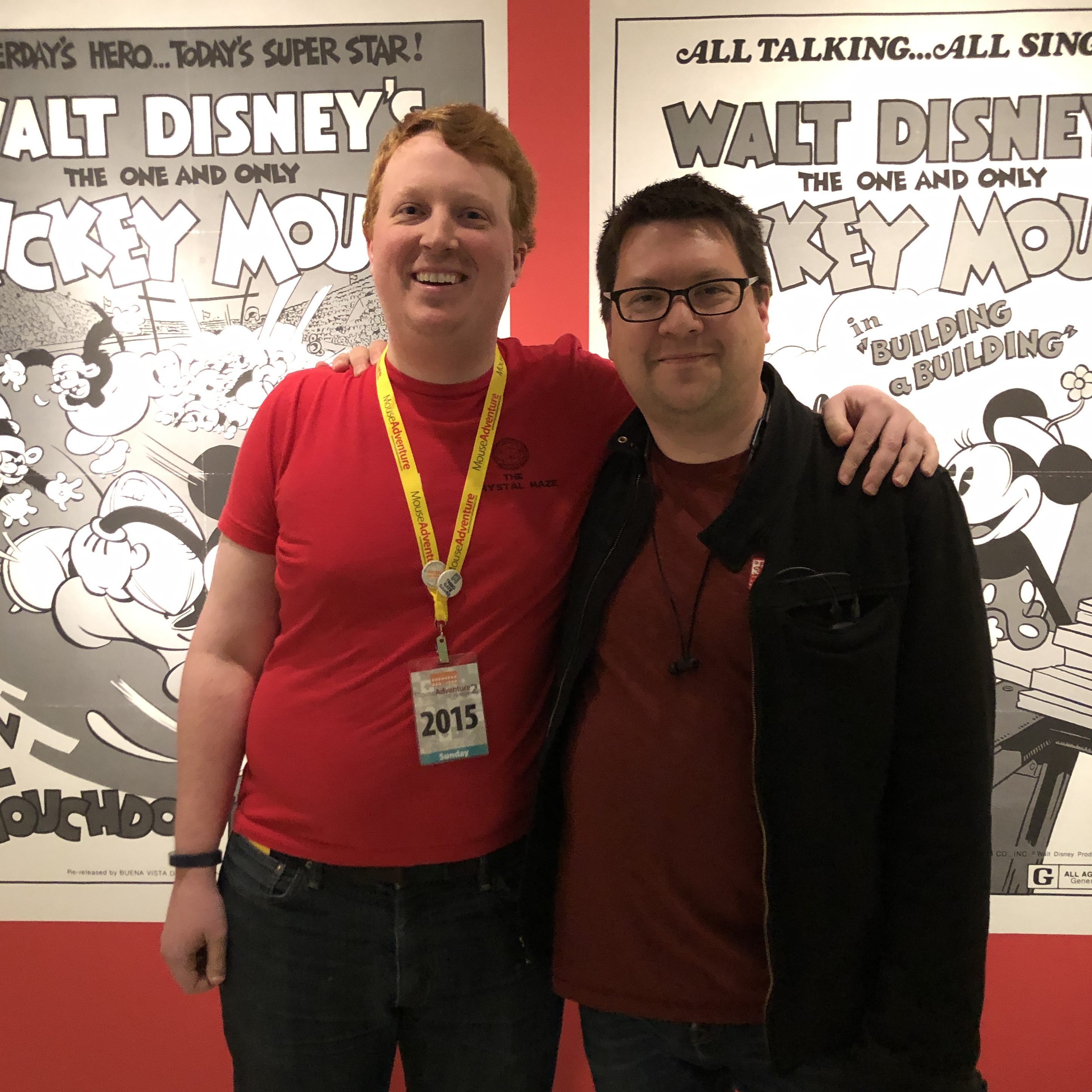 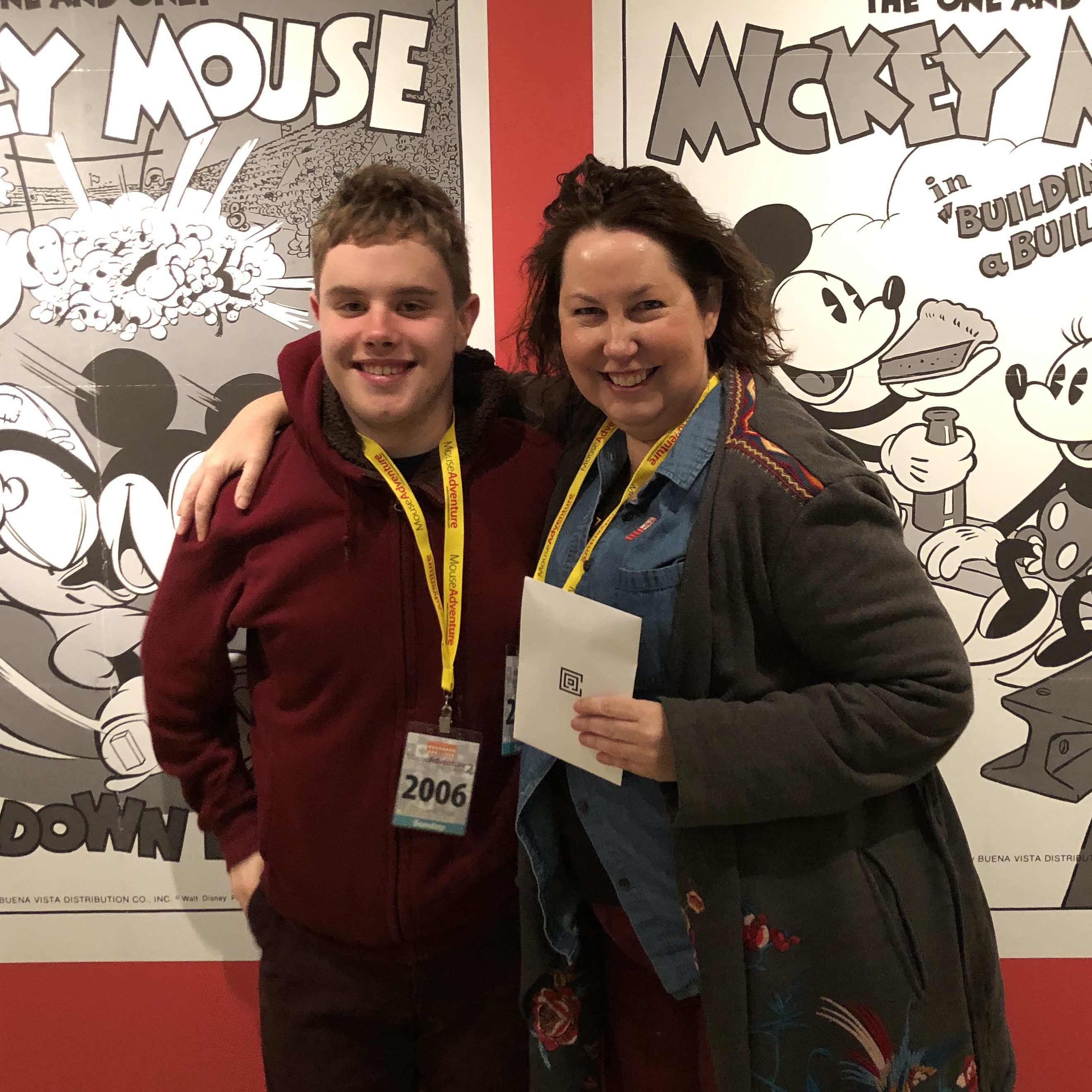 You can view all of the candid event photos in our online gallery. Discuss the game and ask questions on our Third Gate Games forums.

Thank you also to our MouseAdventure crew volunteers Amanda and Jen.