Each MouseAdventure recap begins with a report that the most recent event was our Biggest Game Ever, and indeed MouseAdventure has grown from the 36 teams who attended our inaugural event in 2000, to nearly 170 teams last fall. With a move to the Paradise Pier Hotel for the Spring 2007 event, however, we had to end our growth streak so we could fit the crowd into the ballroom.

Though past events have really not been much larger than this one, something about announcing a limit to the number of players caused an early crush of registrations, and the event sold out in a record six days (trust me, we were as stunned as you). In the end, 153 teams came out for a day of fun and questing in the Disneyland Resort.

Our Spring 2007 event featured a (modified) return to our MouseAdventure Classic format, a game inspired by the Disneyland’s cast member-exclusive Minnie’s Moonlight Madness event. Teams were given a variety of tasks to complete and puzzles to solve, each assigned a difficulty level—from “A” for the easiest quests to “E” for the most difficult. Teams chose to register for either the Basic or Advanced division, with the Basic division teams receiving only quests “A” through “C,” and the Advanced teams receiving the entire packet. Of course the Advanced teams still had just five hours to complete the event, making time management more important.

Although we returned to our roots with this classic format, the spring event introduced a number of new elements to the event. Based on feedback we received from an online survey we conducted after our Fall 2006 MouseAdventure, we created a brand new Family division that allowed players as young as 6 years old to participate as official team members for the first time. Ten teams registered for the Family division, but if their reaction is any indicator, we’ll have a lot more families next time around.

Our headquarters for this event was the Paradise Pier Hotel, and by 9:30 a.m. on Sunday all 500-plus players had assembled on the third-floor pool deck for the largest group photo in MouseAdventure history. (This was also likely the last group photo we will subject teams to, as it has become nearly impossible to identify individuals or even teams in the crowd.) By 9:45 the teams were back downstairs in the hotel ballroom, and having to quickly decide if they wanted to stay for a new trivia challenge worth up to 100 points, or collect their quest packets a little early and earn more game time. In the end only two teams decided to abandon the trivia portion of the event, and the remaining teams answered questions projected on a giant screen at the front of the room. This was the first time we incorporated a visual presentation in the event, and it was very well received.

After teams completed the trivia section, they traded their trivia answer cards for their quest packets and headed off in search of their first quest… or so we expected. In reality, several dozen teams decided to camp out in and around the ballroom to plan their strategy, and a few teams were still in the ballroom when we had to lock up at 11:00. The quests sent teams through Downtown Disney and into both Disneyland and Disney’s California Adventure—some teams were quite anxious to show us their pedometers after the five-hour event.

With Disney’s PhotoPass department offering to take the team photos this year, we sent teams into the park to find the PhotoPass photographers to get their team photo taken. Because PhotoPass is still aggregating all 150-plus team photos into one master account, this unfortunately means a delay in the publication of the team photos here; we hope to publish them soon.

After the quest portion of the event was over, teams were invited to return to the Paradise Pier Hotel ballroom for our post-game trivia challenge while everyone waited for the results to be tabulated and the winners announced. The ballroom provided not only an air conditioned place to relax after the event, but a superior sound system and the use of a projection screen before and after the main event. Teams were thrilled to see a slideshow of candid photos taken during the event, and to be able to clearly hear everything that was happening. After several rounds of trivia—including a fun new “Impossible Trivia” element—and lots of raffle prizes, we announced the winners and bid farewell to another successful event.

A-1: Midway Mania
Teams filled in the names of the Midway Mania games into provided blanks, and unscrambled the highlighted letters to form another word.

A-2: Fruit Mixup
Teams located and counted items in the Bountiful Valley Farm area, then used the resulting numbers to solve a simple math equation and find a word that had the same number of letters as the solution.

A-3: Goody Texting
Using the numbers and letters from a phone dial pad, teams had to decipher a question that led them to find the attraction posters at Redd Rockett’s Pizza Port in Tomorrowland, then provide the height requirement for the only attraction depicted in the posters that is still in operation at Disneyland today.

B-1: Dinnertime in Downtown Disney
In honor of the Food & Wine Weekends, we sent teams into Downtown Disney to calculate the cost of a dinner party for Mickey and one, two or three guests. Teams then needed to tell us how much money Mickey saved vs. the cost of tickets to the passholder-exclusive Taste event.

B-2: Go and Have a Ball
We provided teams with a giant word search puzzle, but they had to locate the list of words to be searched for on a sign around the Disneyland Hotel. When solved, the remaining letters directed the teams to find the Jungle Cruise boats near the Neverland Pool area, and give us the number of the boat that catches fire.

B-3: It’s time to get things started…
The original version of this quest was only an “A” ticket, but a last-minute change in a window display outside Playhouse Disney forced us to replace one question with something that turned out to be considerably more difficult. For this quest teams had to identify and complete sets or sequences around the Hollywood Pictures Backlot of DCA, and then use the missing items to eliminate letters from a grid. The remaining letters formed one part of a final sequence

C-1: A Celebration of Disneyland’s 52nd Anniversary
We thought teams would appreciate an air conditioning break at this point in the game, so we sent them to watch the anniversary film featuring Steve Martin at the Main Street Opera House. Teams then had to answer a set of questions about the film, and based on those results answer a final question: How many passengers does a Tower of Terror elevator car hold.

C-2: it’s a small list, after all
Teams were asked to identify which item from a list of 28 items could not be found inside the “it’s a small world” attraction. (Family teams had a smaller list of items to eliminate)

C-3: Toontown Realty
We tasked teams to appraise the value of the buildings in Downtown Toontown, using a set of criteria provided to them by the Big Bad Wolf.

D-1: Oh, So Evil
The evil paragraph is a signature MouseAdventure puzzle, and no event would be complete without one. (Our teams would likely be thrilled if we could bring ourselves to perhaps skip just one event…) For this evil paragraph, we asked the teams to answer a series of 10 questions on Main Street, and then use the resulting answers to identify 10 letters from the Mickey Mouse Creed conveniently on display in a window of the Disney Showcase shop.

D-2: Show Time!
We provided teams with a list of Disneyland Resort shows and show times, and asked them plan a schedule that would include watching every one of the shows listed in the same day.

E-1: Criss Crossin’ Over California
This quest was originally written for the inaugural Enchanted Race event in the spring of 2005, but was cut due to concerns about the length of that event. It was then supposed to be included in our second Enchanted Race, but cut for the same reason. (Remember when we sent you to Soarin’ to get a FastPass last time? This was why).

Teams rode Soarin’ Over California at DCA, and then used a provided transparent map of California to trace the route taken on the attraction, starting in San Francisco and ending at Disneyland. Once teams plotted the journey, we had them place the transparent map over the guide map of Disney’s California Adventure, and match the California cities to DCA attractions. (Had you ever noticed that DCA is roughly shaped like the state it’s named for?) A little geometry and teams should have found “Maliboomer” as their final answer. (For 20 bonus points, we made them send one person from their team to ride the Maliboomer)

In DCA, we asked the teams to simply draw pictures of OO-SOO-MA-TE and AH-HA-LE. In Disneyland, we provided teams with the image from a pressed penny machine, and asked them to locate the machine and tell us what two other penny images were available from that machine.

OO-SOO-MA-TE and AH-HA-LE are a bear and a coyote featured in a story etched into a rock near the exit from Grizzly River Run. The pressed penny machine in question is located in Adventureland, and features three different poses of Minnie Mouse.

If the two clue sheets were correctly layered and held to light, a la the Da Vinci code, a final question was revealed, asking how many people were watching “The Moose Hunt” in the Main Street Cinema.

We always toss in a few side games, and this event included an Eye Spy quest, a “find the crew member” challenge, a bonus Eye Spy, and even pin trading for the family division teams. We also included a “hidden quest” for the teams, a simple encryption buried inside the ticket book graphics that decorated each page. Only one team successfully found and answered that quest, so teams are hereby warned that there are more hidden quests in your future. 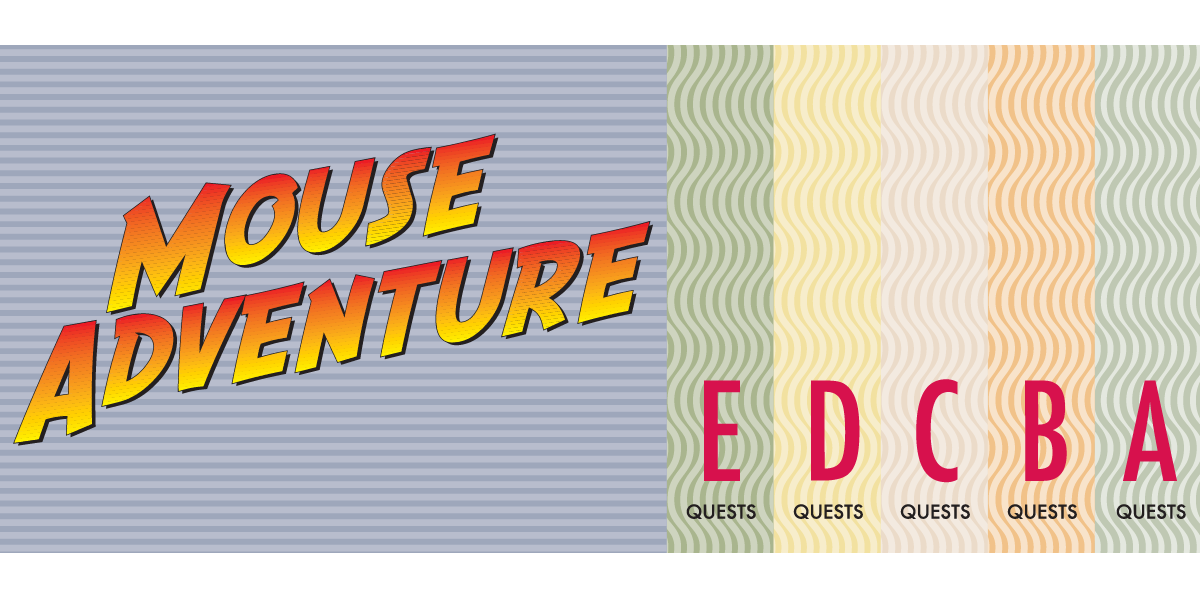