The Enchanted Race and
PhotoAdventure

Nearly 170 teams and almost 600 people came to the Disneyland Resort for a day of quests and puzzles. This event marked the debut of a new PhotoAdventure game format and the return of our Enchanted Race, as well as the brand-new post-game Trivia Challenge. In keeping with long-established MouseAdventure tradition, the event day also featured record-setting heat, with temperatures soaring to 90 degrees.

The event actually began on Saturday, with quite a few teams taking the opportunity to check in during a potluck picnic at Disneyland. This picnic gives players a chance to size up their competition, meet staff and crew in a more relaxed environment, and earn a few extra moments of sleep on Sunday morning by signing in early.

As soon as the parking structure opened on Sunday morning, the Esplanade between Disneyland and Disney’s California Adventure was filled with smiling happy MouseAdventurers. It’s so much fun to greet returning players and get a glimpse of the great team uniforms.

All too soon it was time to wrangle the teams into position for group photos, and then to get the games started. The Enchanted Race began when Disneyland opened at 9 a.m.; teams participating in the PhotoAdventure followed at 9:30. The start of the event is something akin to watching confetti scatter in the wind: it’s out of our hands, and all we can do is wait to see how it lands.

The “invitational” Enchanted Race is an event designed to pit teams together in a timed race over a large area of the resort in a predetermined sequential course. Open only to experienced teams that have competed in a previous MouseAdventure event, it is probably the most difficult MouseAdventure game format we offer.

With barely half of the teams able to complete the Enchanted Race format when it was first introduced in early 2005, we decided to make this event both shorter and easier. Instead of sending teams through Downtown Disney, into the parking structure and across Harbor Boulevard to the Howard Johnson Plaza Hotel, we confined this event to the two Disneyland Resort theme parks, and even cut quests from the game to shorten the event time. As it turned out, our revised game proved to be much more difficult than the original.

Teams started on Main Street, where they were sent to answer a series of questions about the area. From there, we told them to obtain Fastpass tickets for Buzz Lightyear’s Astro Blasters, and then sent them to ride their choice of the Mark Twain or the Disneyland Railroad to gain the information needed to solve their next puzzle.

Teams quickly found themselves back in Tomorrowland, where they were asked to pit their team’s best Space Ranger against a player from another team in a battle to defeat the Evil Emperor Zurg. The winning Space Ranger was provided information that would help their team advance; the loser was matched against another Space Ranger and sent back into battle.

While the Space Rangers were off saving the universe, their teammates struggled to locate their next destination from a drawing they had created, which led them to the piles of faux luggage stacked up inside the Main Street locker area. This quest proved to be considerably difficult for the teams, and the event coordinators learned why pre-event testing can never replicate game conditions. When test teams get frustrated, they are quick to ask for help. Not so for our competitive Enchanted Race teams, who went to great lengths to avoid incurring the penalties associated with asking for help.

Once teams opened the correct locker, they received a compass and a set of coordinates that eventually led them to the Enchanted Tiki Room. Several of the teams were able to answer the quest’s question based on their memorization of the Enchanted Tiki Room soundtrack, while others enjoyed the opportunity to sit and enjoy a Dole Whip while waiting for the next show to begin.

From the Tiki Room, teams headed into Disney’s California Adventure to solve a quick word puzzle and to take a trip through Monstropolis. Teams used their compasses again to navigate through DCA to solve their next puzzle. From there, teams took a spin on the Sun Wheel and tried to spot the three event crew members carrying umbrellas around Paradise Pier.

Teams were then instructed to head back to Disneyland, where they got to admire the clever brick sidewalks along Main Street, examine the menu at the Hungry Bear restaurant, and try to tell time using the miniature character statues around the Partners statue. It was at this point that teams once again surprised us by their outright aversion to time penalties.

At the start of the game, we had instructed teams to locate a series of stopped or broken clocks around the resort, and record the times displayed on each. At this last checkpoint, we intended to check their answers and hand them the final information needed to reach the finish line. We warned teams that they would receive a penalty for missing or incomplete answers, but we figured by this point in the race the teams would take any penalties rather than delay their arrival at the finish line. So we were extremely surprised when teams instead opted to go track down any clocks they had not yet found—one team returned to DCA in search of a missing clock, another team spent nearly two hours trying to find them all.

Based on our pre-game tests, we expected that most teams would be able to finish in the seven hours allotted, some in as little as five hours. In the end, just 11 of the 40 Enchanted Race teams managed to cross the finish line by the 4:00 p.m. deadline, and what was intended to be a kinder, gentler game proved to be much more difficult than imagined.

Eleven teams managed to navigate the Enchanted Race in seven hours or less, and each finishing team should feel a huge sense of pride in that accomplishment. That aversion to penalties paid off for some teams after all; teams crossed the finish line so close together that the winning teams were those that incurred the fewest penalties along the course. The adjusted finish time in the results is the team’s actual finish time, plus any penalty time incurred through assistance, incorrect answers or other game violations.

MouseAdventure Masters team Brother Bears took home their fourth First Place finish, with a final adjusted finish time of 4:07 p.m., proving once again why we only let the Masters teams compete in the harder Invitational events. Of the other three Masters teams, the Happy Haunts placed eighth, The Denton Affair did not complete the event, and The-Mouse.com was drafted to be event staff. The Pillage People earned second place with a final adjusted finish time of 4:12 p.m., just five minutes out of first place.

The results represent a slight change from the winners announced after the event. Team 3, Simba’s Pride, led the pack during much of the race and was actually the first team to cross the finish line. Of course, there is one disadvantage to being the front-runner, and that is the possibility that your team will discover an error in the game materials that was missed during all of the pre-game testing. Simba’s Pride encountered a glitch in the final question leading to the finish line, and was granted a time credit for the time lost while the error was corrected. That time credit was not included in the final tabulation. Their adjusted finish time was 4:18 p.m., putting them in third place.

For the “open” game this time around we decided to change things up a bit and send our players into Disneyland armed with cameras in addition to their pencils, clipboards, and puzzle solving skills. Eight puzzles eventually lead teams to instructions on specific photographs to take inside the park and they had to try and match eleven provided pictures with snapshots of their own.

The day was hot but many teams took advantage of the extra long playing time (about six hours was available to most teams) to enjoy more rest time and maybe a meal. The game also included rides on several attractions, taking teams onto Buzz Lightyear Astro Blasters, the 50 Magical Years exhibit, Snow White’s Scary Adventure, and – for some teams – the Jungle Cruise.

Scores were generally high and regardless of how well any team did, we hope everybody had a great time just playing. While no teams turned in perfect scores of 73 points, two teams did achieve the next highest possible score of 70 points. The tie goes to the team that turned in first: team 49, better known as DF4. DF4 are long time players of MouseAdventure and are now candidates for our Masters category with their second event win (after three wins teams are retired from competition). It is somewhat boggling to me that we’ve been doing these so long, but DF4 won their first event in the fall of 2001.

In second place with 70 points as well are The Raiders of the Lost pArk (team 27), another well experienced MouseAdventure team. At 67 points were three teams. Sorcerer’s Apprentice (team 119) get third place; fourth goes to team Club 33 WannaBes (team 39), one of dozens of new teams who joined us for this event. The final team with 67, and in fifth place, is Zurg Busters (team 22) another new team. It seemed unfair to cut the prizes off at third place when two other teams had the same score (if in a bit more time) so all five places will receive prizes. 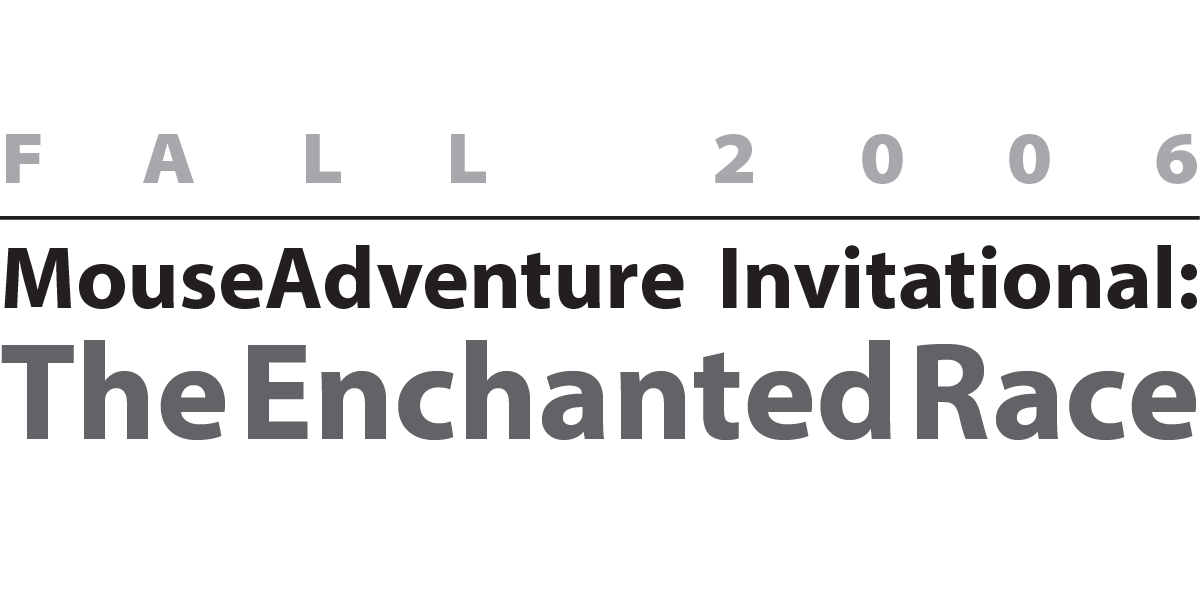