If you happened to be in Disney California Adventure last Sunday, October 26, and saw groups of people sporting bright yellow lanyards, colorful T-shirts and a look of intense concentration, you were watching some of our MouseAdventure Sugar Rush teams in action. Over 600 players came out for a day of puzzles and trivia, and the weather cooperated by providing an absolutely beautiful Southern California day for our teams to enjoy.

MouseAdventure Sugar Rush used our “Mad Scramble” game format, which meant teams had to solve (or skip) each quest before moving on to the next one. Some of our teams consider this to be the most challenging event format we offer, with others say it’s their favorite type of game. Teams chose to compete in the Basic division and solve 10 quests (each named for a different race car driver from Wreck It Ralph), while those wanting an even greater challenge could take their chances at the Advanced division, with three additional quests to solve in an “extra lap.” All teams also had a packet of Sweet Trivia to solve during the day.

After our usual sign-in and orientation session at the Paradise Pier Hotel ballroom on Sunday morning, we sent teams into Disney California Adventure to pick up their first quest packet at one of five “scatter” locations around the park. Unlike our usual point-based games, MouseAdventure Sugar Rush was an entirely timed event, with teams attempting to complete their quests in the shortest amount of time.

After the game ended at 4:00 p.m., the MouseAdventure team headed back to the Paradise Pier Hotel to calculate the final adjusted times for each team. The players reconvened at the Paradise Pier Hotel Ballroom at 5:00 p.m. for a dessert buffet and question-and-answer session with the event producers before the official announcement of the winners.

Definitely the most challenging quest in the event, teams were sent into A Bug’s Land to look for items identified only by their packaging weights. Once teams identified each item, they used indexing to pull specific letters from each name. The letters corresponded to a specific candy in the provided Candy Gram. Teams then used the letters to decode the final question.

Read in the correct order (in this case, from top to bottom then left to right), the question asked for the type of horseshoe oats in Cowboy Crunchies cereal. Teams had to visit the entrance of “a bug’s land” to answer the question.

What would a candy-themed game be without a real game of Candy Land? We asked teams to find objects in Hollywood Land, and write down the number of that object’s place in the associated grouping. For example, the letter “L” from the Cahuenga Building sign was the 12th letter in the series.

Each object was associated with a different Candy Land card. Once teams found all of the items, they played the associated cards in order to move around a provided Candy Land board. To receive credit for this quest, teams showed us the square they landed on once they ran out of cards.

We gave teams three sheets with lettered squares representing the light-, mid-, and dark-colored tiles of the Buena Vista Street fountain, and asked them to match the squares to the actual tiles around the top row of the fountain. Teams then crossed off each tile as they matched it, and used the associated letter to help form a question.

Read in the correct order, the letters formed a question asking how many Nemo’s Frolicking Fish could be purchased for 10 cents at Trolley Treats. Teams. Team then needed to find a candy-vending machine prop inside the store, and also realize that each pack of 40 Frolicking Fish was 5 cents.

We sent teams into the Esplanade between Disneyland and Disney California Adventure to examine the honeycomb-like brick arrangements. Teams had to find nine specific bricks within the pictured groupings, and unscramble specific letters taken from those bricks to identify a question. Properly solved, the question was “Name of book Goofy is reading.” The answer was found on banners throughout the Esplanade.

Teams were sent through Condor Flats to find a series of 12 words and phrases, and fill in the provided blanks. We started the teams off with just the Ms from each word, represented by color-coded M&M candies. Once they found all of the correct phrases—no easy task since there were multiple correct answers for some of the lines—they then unscrambled the highlighted letters to form a three-word phrase, “they really pop.” The answer is found on the popcorn cart in Condor Flats.

Teams had to search the Grizzly Peak area to find 10 phrases. We provided the blanks, and the conjunction found in each phrase. Teams then used the specified letters to identify an item found in Grizzly Peak. For the final answer, we asked teams for the cost of that item. While probably more popular on warmer days, “cold showers,” as advertised on a sign across from Rushin’ River Outfitters, are 5 cents.

Teams were sent around Paradise Pier to look for quotes or catch phrases from five restaurants or snack stands, and then return to the MouseAdventure Pit Stop with that information. When they returned, teams were given a set of plastic toy gears coded with letters, and instructed to use the gears to decode their final question.

The decoded question read, “What is fun in the sun for everyone?” The answer could be found on the area sign near Ariel’s Grotto, and also on the parade gate near Boardwalk Pizza and Pasta.

We thought that returning MouseAdventure players would suspect something was amiss when we gave them a sheet of difficult- or impossible-to-count items in the Little Mermaid – Ariel’s Undersea Adventure attraction, including the number of spinning starfish in the “Under the Sea” scene (there are 50, in case you’re curious). Still, every team took our questions seriously, and boarded the ride prepared to count every requested seahorse, frog, and crab.

For most teams, the true nature of the quest became apparent when they entered the “Under the Sea” scene, and the newly installed black lights in the room illuminated a message stamped in ultraviolet ink on their quest paper. Other teams had to ride several times before they noticed the writing. The stamp began, “Math is hard!”, and instructed teams to simply provide the name of the ride vehicle for their final answer. The sign at the attraction entrance contains the requested name.

Teams were asked to answer eight multiple-choice questions in the Pacific Wharf area, and use a grid corresponding to their answer to draw a maze. Teams then had to navigate through the maze, using numbers along the path to decode their final question. We asked for the phonetic spelling of Pinot Grigio; the answer is on a sign near the Blue Sky Cellar.

Now that the lines have died down somewhat for Radiator Springs Racers, it was time to finally use the scenic overlook signs found in the ride’s extended queue. Teams had to find each location identified on the maps, and use those words to solve a large word-search puzzle. The remaining letters in the word search told teams to draw a copy of…

The word-search grid also contained one of two fake hidden quests. Some of the remaining letters read, “this is not the hidden quest, keep looking.”

Only one team found the hidden quest in this event, so we clearly hid it too well. The first letter of each trivia question, read in order, formed the question, “What is next stop for Trolley Treats.” The answer is in the shop window.

After completing the 10 basic quests, Advanced teams received a coded “glitch” instruction sheet, and had to decrypt the message to receive instructions on how to proceed with the game. During the “second lap” portion of the event, Advanced teams could split up and send players individually around the park to gather data, but the whole team had to be present to submit each completed quest.

Teams were asked to solve a classic logic puzzle involving the snack preferences of the goats of Disneyland’s Big Thunder Ranch petting farm.

This deceptively simply quest could be solved without ever stepping off of the Red Car Trolley track. Teams were given a list of 14 phrases to complete in Hollywood Land and Buena Vista Street. Using specified letters from those answers, teams decoded a cryptogram containing another phrase found in the same area. We asked teams to complete that phrase for their final answer. The phrase was part of a shipping label found on a crate in the Tower of Terror FastPass distribution area.

The ability to split up came in especially handy during this quest, as we sent teams in both directions around Grizzly Peak to find the numerical answers to eight questions. We told them that each set of numbers was the combination to one of a pair of lockers, and they would need to open both lockers to retrieve part of their final puzzle.

Once teams had both sheets of paper, they had to place one sheet on top of the other, and hold them both to a light to read the final question. The question asked in which letter of the welcome to Cars Land billboard was the Cozy Cone depicted.

Results for MouseAdventure Sugar Rush were announced at the closing festivities on Sunday night, October 26. We recognized the top three teams in the Returning Teams category, and the top team in each of the New Team and Family Team categories (Family teams include at least one player under 13). Winning teams received a prize package of Disney books, DVDs, collectibles, and candy.

MouseAdventure Masters are those teams who, after taking first-place honors in any competitive division three times, are honored with retirement from future competitions. MouseAdventure Masters teams can participate in future events at no charge, and help serve as a benchmark for up-and-coming teams to measure against.

Two Masters teams participated in the advanced division of this event. Their times are as follows: 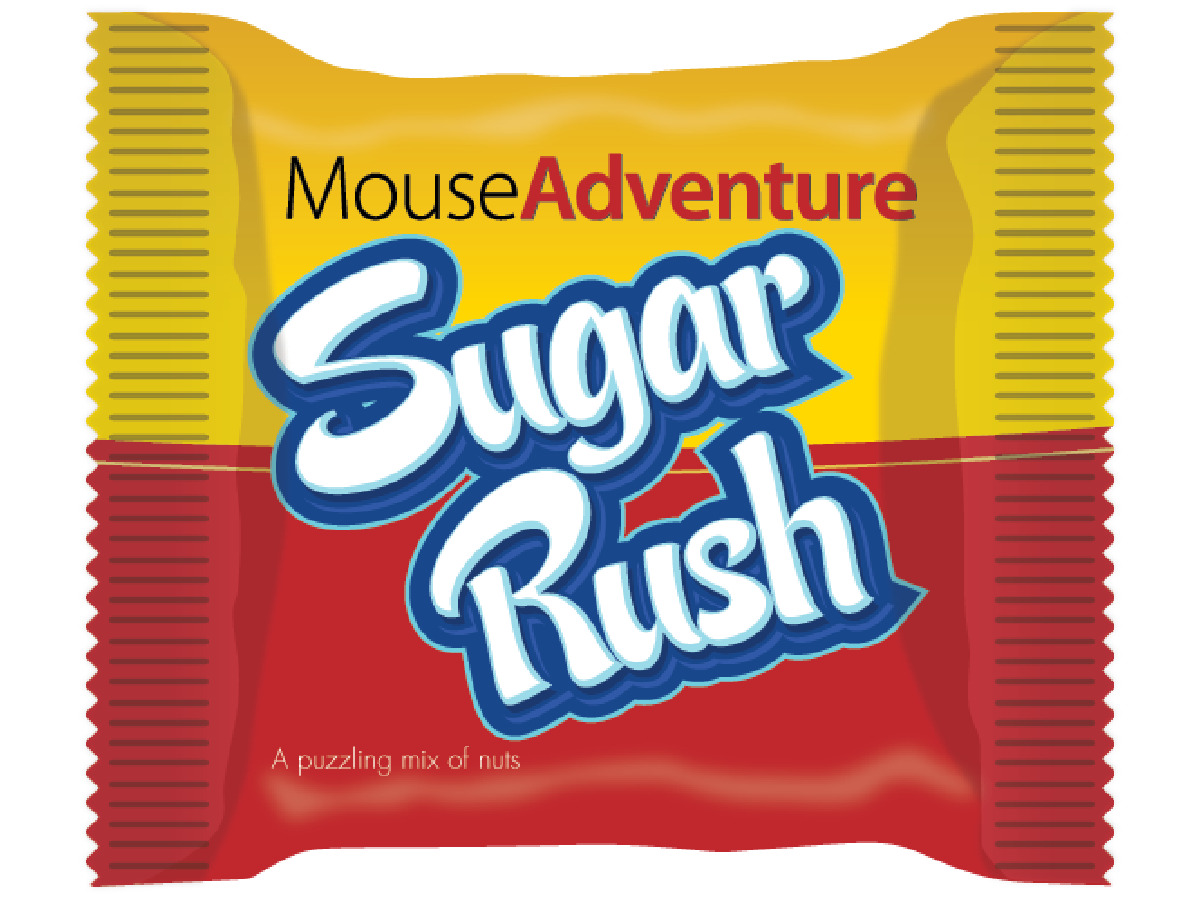