Our initial plan for 2010 was to hold just one big 10th Anniversary MouseAdventure event at Disneyland and one MouseAdventure World Explorers event at Walt Disney World. After all, players who attended the post-event gathering after the spring event almost certainly heard repeated denials that there would be a second Disneyland event this year. And really, that was the plan…

Yet before the spring events even took place, Joe Stevano had already designed a logo for a potential Halloween game, and several MouseAdventure crew members had already started tossing around ideas for trick-or-treat quests (and in fact, I think this game’s Villains Henchman quest was written during the Anniversary game).

It took another month to be be sure that we could pull off this second game, but on July 17 we announced MouseAdventure Holiday: Trick or Treat and thus it came to be, that on Sunday, October 17, 700 players gathered to see what devilish tricks and treats we’d devised for them.

Ater posing for the traditional team photos and showing off their clever team T-shirt designs in our Halloween T-shirt parade, master of ceremonies Andrew Rich started the pre-game welcome by honoring those players who had just walked as part of Team MousePlanet during that morning’s CHOC Walk, helping raise nearly $12,000 for Children’s Hospital Orange County during its annual fundraiser.

Andrew also acknowledged the 24 players from 11 teams who had gone to Walt Disney World in Florida just a week earlier to participate in our MouseAdventure World Explorers 2 event at Disney’s Animal Kingdom park. It was then time to get down to the very serious business of reviewing the event rules, before releasing the teams into Disneyland to solve a series of chilling challenges.

When conducting events as large as MouseAdventure, we like to send our teams scattering throughout the park as soon as possible to prevent huge masses from congregating in the same land—so their first challenge was to locate the MouseAdventure station in one of four designated “neighborhoods” to receive their quest packet. Teams would also return to these stations a little later in the day to “trick or treat” for bonus quests.

While some teams said this event felt longer to them, others said it went by in the blink of an eye—but by 6:00 p.m., all teams had turned in their answer sheets. The MouseAdventure Holiday format does not have same-day grading, and teams knew they’d have to wait a few days for the results, but some teams immediately began to compare notes with other teams, while other players went home to start talking about the event on our MousePad discussion forum. After a grading snafu, we announced the final official results on Thursday night, motivating some teams to begin plotting their strategy early for improving their scores in the Spring 2011 event.

Pumpkin Carving (20 points)
Teams scoured Main Street, U.S.A. to look for answers to nine questions, each corresponding to one section of a cut-up photo of the pumpkins that decorate the street. By correctly answering all nine questions and transferring the corresponding image into a grid, teams created a drawing of a specific Main Street pumpkin. For their final answer, teams had to identify the shop or restaurant on the ground floor of the building of that pumpkin’s location.

Most teams solved this quest after answering just a few questions, but two questions gave teams the most trouble:

Gallery with No Windows (30 points)
One member of each team was asked to search the Disney Gallery for answers to 10 questions about the concept art in the Day One Disneyland exhibit, then use the answers to fill in a crisscross puzzle grid. Certain letters in the grid were highlighted, and the player had to unscramble those letters to form a five-word question.

This was one of two quests that had to be solved by just one member of a team. The rest of the team was able to work on other quests while they waited, and clever teams used the time to tackle trivia or work on other puzzles. In an effort to prevent overcrowding in the small gallery, we allowed only 15 players in at a time. Teams that solved this quest earlier in the day could do so with no wait, while teams that put it off to the end of the day found themselves waiting in a line to get into the gallery.

While decoding the solution was fairly straightforward for most teams, finding the actual answer proved more difficult. Quite a few teams went to Frontierland to look for the answer at the actual Golden Horseshoe building, and in the process completely overlooked the vintage postcard on display right in the middle of the Disney Gallery. Some teams found the postcard but had trouble reading the small letters, and incorrectly wrote “Blue Foot Sue” on their answer sheets.

At least one team was knocked out of the running by answering “Pepsi Cola.” Pepsi was a sponsor of the Golden Horseshoe Review, and its logo was blurred out of the postcard photo. Although we were impressed that teams could decipher a digitally altered logo… it wasn’t the right answer.

Oogie Boogie Wheel (30 points)
We sent teams to ride the Haunted Mansion Holiday attraction to find out which gifts are given each day during the 13 days of Christmas according to the tarot cards in the seance room. Using that data, teams used a our own version of Oogie Boogie’s wheel to decode a question.

It seems something always manages to slip through during our testing of the event, and none of our crew noticed that the sign outside the Haunted Mansion actually reads “Days TO Xmas,” not days ” ’til.” Because of this ambiguity, some teams actually told us how many days there were until Christmas, 2010 from the event date (69 or 70, depending on whether Christmas day itself was counted). We accepted both of these answers.

‘R’ Marks the Spot (30 points)
Teams had to sail the Spanish Main to find 10 words with an “R” in them somewhere in the Pirates of the Caribbean attraction. Then it was a simple matter of unscrambling the indicated letters to reveal the hiding place of a fictional sweet treasure hidden by Jack Sparrow.

Players needed sharp eyes to find all of the words. The word most teams missed was “proceeds,” found at the bottom of the poster in the auction scene. It seems that two teams tried to solve the puzzle without all of the necessary letters, and answered “In a drum set.”

Try an Apple, Dearie (30 points)
It’s surprisingly easy to get your apple a day at Disneyland, and we asked teams to find the price of a list of apple treats sold around the park, such as Bratwurst with apples, a sliced caramel apple, a bag of sour apple balls, and frozen apple juice. Teams then used those answers to solve a drop-down puzzle to reveal a question.

The text on the sign, found outside Pooh Corner in Critter Country, confused some teams. It reads “Mt. Lebanon, Col., Co., N.Y.,” which is abbreviated for “Mount Lebanon, Columbia County, New York.” Quite a number of teams mistook the abbreviation for county and wrote “Colorado” on their answer sheet. We accepted both answers. Some sharp-eyed teams found the same sign in a shop on Main Street, and saved themselves a walk to Critter Country.

Haunted House of the Future (40 points)
We erased words from 17 photos taken inside the Elias family home in Innoventions, and sent teams to find the missing words. They then use those words to solve a cryptogram.

Toontown Treats (40 points)
Teams had to match photos of 13 doorknobs with their corresponding Toontown location. We also gave teams drawings of the treats each location was handing out during trick-or-treating. When teams matched a doorknob to a location, they were instructed to cross out the image of that candy from a grid. When the puzzle was completed (and turned sideways), the name of a Toontown location was visible in the grid. For the final answer, we asked teams to tell us what year that location was established.

Many teams wrote “Toon Park” on their answer sheet, and not the established year as requested by the quest instructions; an error which cost at least one team a first-place finish.

Villains Meet and Greet (50 points)
Each team got to select one member to network with other teams to gather data to solve this puzzle. The designated player wore a name badge that identified them as one of 10 Disney Villains, and received a stack of that villain’s business cards printed with an encoded phone number. As teams encountered other villains, they exchanged business cards until they had all 10 cards. Then teams used the encoded phone numbers to reveal a question.

Quite a few teams stopped decoding this puzzle once they reached the word “tour,” and assumed the answer was the price for the Happiest Haunts Tour ($64), not the Ultimate Experience version as requested.

Teams could visit the MouseAdventure stations in each “neighborhood” to trick-or-treat for one of four bonus quests. When each team arrived, they were invited to pull a button out of a Mickey Mouse pumpkin pail. If the team pulled a button marked “Treat,” they received the bonus quest and could begin to solve it, or move on to another neighborhood. If the team pulled a “Trick” button, they had to complete an extra task before receiving their bonus quest.

Scary Eye Spy (5 points each)
We gave teams 16 photos taken around Disneyland, and asked them a question about each. Eye Spy is one of our favorite parts of MouseAdventure, and we really love reading the creative (as in wrong) answers teams come up with when they just don’t have any idea where to find the real answer.

For our Day at the Park event last spring, we borrowed a scoring machine and gave the teams all day to complete the trivia. The teams loved having the additional time, scoring took almost no time at all, and we decided to purchase the machine to use at future events. For our Trick or Treat event, teams were given the trivia quest as part of their game materials, and turned in their machine-readable answer sheet at the end of the day. Teams again loved having so much more time to answer the trivia questions, and because of this, the scores were unusually high compared to past events. The highest Trick-or-Treat trivia score was 44 out of a possible 49 questions (one question was discarded due to an error), for a score of 88.

In what had to be a painful lesson, three teams got zero credit for trivia because they failed to write their team number anywhere on their answer sheet before they turned it in.

Hidden Quest (20 points)
This may have been the least-hidden quest ever used in a MouseAdventure game, and more than half of the teams found it. As teams visited each MouseAdventure neighborhood to claim their Trick or Treat buttons, sharp-eyed players noticed that a word was written on each ear of the Mickey Mouse pumpkin used to hold the buttons. When the eight words from the four pumpkins were unscrambled, they formed the question, “What is the name of Jack’s ghost dog.” 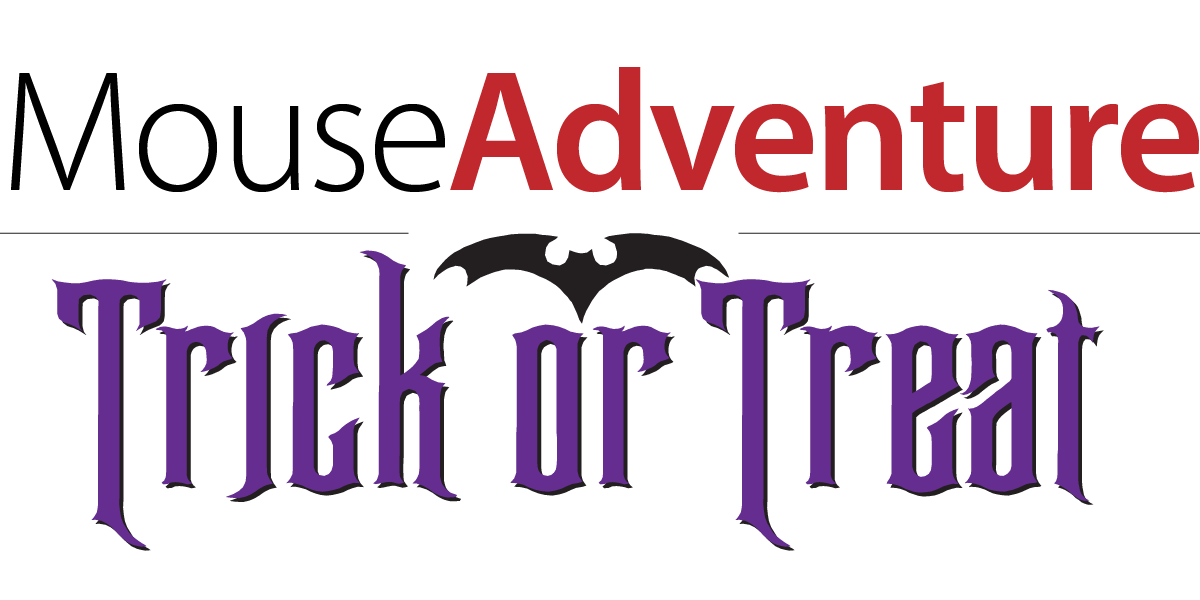