MousePlanet’s 15th MouseAdventure event was held October 14 at the Disneyland Resort, and we are proud to say that we once again set a new record for our Biggest Event Ever. More than 650 players formed 190 teams to compete in the 6-hour challenge. Despite a 30 percent increase in event capacity, registration sold out in an astonishing 44 hours.

Our event began at 8 a.m. at the Paradise Pier Hotel ballroom, where teams received their sign-in packet, posed for team photos, and got a chance to size up the competition before the games began. David Perry of MouseAdventure Masters team The-Mouse.com welcomed new players and teams with a brief new-player orientation to prepare them for the event to come. At 9:30, following a quick event overview and after solving some unexpected technical issues, teams settled in for a 50-question trivia challenge. Several teams opted to skip the trivia section in order to gain more time for quests, but one team took a few seconds to fill in random answers on their trivia answer sheet before trading it for their quest packet. This clever strategy paid off, and earned the team 14 points! Once trivia was complete, teams rushed to trade their trivia answer sheets for their packet of quests, and by 10:00 all teams were heading into the parks to begin the adventure.

The title of the Fall 2007 event was the “EyeSpy Adventure,” and every quest incorporated photos into the puzzle. We offered teams the opportunity to register for the Basic or Advanced version of the game, and once again offered a Family subdivision of the Basic category just for those teams playing with children ages 6-13. Ten family teams participated in our Spring 2007 event, and we were pleased to welcome 24 family teams this time. All divisions shared one common set of quests, and the Advanced teams received an extra helping of more difficult quests to solve. In direct response to participant feedback from past events, we included copies of the harder Advanced quests as a bonus for Basic and Family teams to give them a taste of what the other players were facing. Several Basic teams said that seeing those quests was enough to convince them to stay in the Basic division for a few more events.

Teams had until 3:30 in the afternoon to complete their quests, and the staff quickly collected answer sheets and raced back to the Paradise Pier Hotel to begin grading, while teams dispersed through the resort in search of much-needed food and drink. In our last post-event survey, we asked teams how they would prefer to pass the downtime between the end of the event and the award ceremony. Since the majority of respondents said that they would enjoy attending an organized activity after the game, we offered an optional dessert mixer, where MousePlanet columnist and author David Koenig entertained the crowd with his fantastic “multimedia extravaganza”—teams who chose to skip the mixer and return only for the awards ceremony missed a real treat.

In lieu of post-event trivia or games, we opted this time to host our first-ever team T-shirt and team mascot competitions. MouseAdventure master of ceremonies Andrew Rich introduced each team who had entered their shirt design into the contest, and announced the winning design. Teams were then invited to show off their team mascot, and the audience voted for their favorite. For many teams this was the highlight of the show, so much so that we might consider holding a team theme song competition next time…

Once the official results were tabulated, the winning teams were announced and invited to come claim their prizes, and with that we ended our 15th MouseAdventure event.

Most of the quests were based on a specific land of Disneyland Park, though there were two park-wide EyeSpy quests that included photos taken all around Disneyland. Advanced teams had one quest each in Downtown Disney and the Esplanade. Quests were worth up to 80 points each, with partial credit available for several quests.

Teams had to “colorize” black and white photos of the tea cup ride vehicles from the Mad Tea Party attraction, then use the correct colors to answer additional questions around the land.

Teams were given five sets of photographs taken around Critter Country. In each set, one photo had been altered (sometimes obviously, sometimes subtly). Once teams identified the altered photo in each set, they added up the value of the corresponding menu items and arrived at a final price.

Teams used photos from Main Street to locate and count decorative pumpkins. Based on those answers, teams had to navigate around Main Street to arrive at their final location. Advanced teams had one extra pumpkin design to locate.

This quest was an expanded version of the very popular “speed Eye Spy” quest from Spring 2007. Teams had to figure out which word(s) had been removed from a series of photos taken around Toontown, then use those same words to solve a word search puzzle.

Teams matched the balcony railings in the provided photos to their New Orleans Square addresses, then used those answers to decode the final question.

This was a major expansion of the “Choose your own MouseAdventure” quest from several events ago. Teams were provided with a small booklet of photos taken around Frontierland and a starting question. Their answer to that question led them to the next question; their answer to the second question led them to a third, and so on and so forth. There were 10 “paths” through the quest; a series of correct answers sent you down one path, while a series of incorrect answers sent you down another, longer path. Each path concluded with a final question.

We went on a photo safari through the Jungle Cruise, and turned our resulting images into photo stickers. We provided each team with a set of these stickers, and asked them to place the images in the order that each animal or scene appears in the attraction. Family/Basic and Advanced teams had slightly different images.

Teams had to identify the villains depicted in carved pumpkins on display in the windows of the World of Disney store, then use those names to complete a word puzzle.

Teams first had to match carpet and flooring samples to Main Street store locations, then determine the cost of all merchandise in a specified display window.

In this modified version of the computer game “Minesweeper,” teams had to determine where Dory had buried a time capsule in the Esplanade between Disneyland and Disney’s California Adventure.

Teams had to locate and complete a series of images, then decode a cryptogram to reach their final question.

Most common error(s): Many teams had problems completing the “_____” “Mars?” “Moon?” series—these images were taken from the scale just inside the Starcade.

We also included two more EyeSpy quests in the event. For the first, we asked Goofy to take photos of his friends around the resort, and of course he got his big thumb in the pictures. Teams had to identify the character obscured in each image. Teams received the Holiday EyeSpy and a 20 point bonus when they located MouseAventure crew members hiding out with the pirates around the Rivers of America. This second EyeSpy was based on the HalloweenTime decorations around Disneyland.

Prizes were awarded to the 1st, 2nd and 3rd place teams in both the Basic and Advanced divisions, and 1st and 2nd place in the Family division. The Best New Team honor was awarded to the highest-ranking new team that did not otherwise win an award; in the Basic division the best new team tied for 3rd place so the award went to the next best new team. We also recognized the team with the highest score in our very difficult trivia section.

Master’s Challenge (not a prize division)

MouseAdventure Masters are those teams who, on the occasion of their third first-place victory, are honored with retirement from competition. Two of our four Masters teams participated in this event, and their scores are presented her as a benchmark for other teams. Having taken their second 1st place victory, The Googlie Bears now join Team DF4 as “masters candidates,” teams who will be retired after their next win. 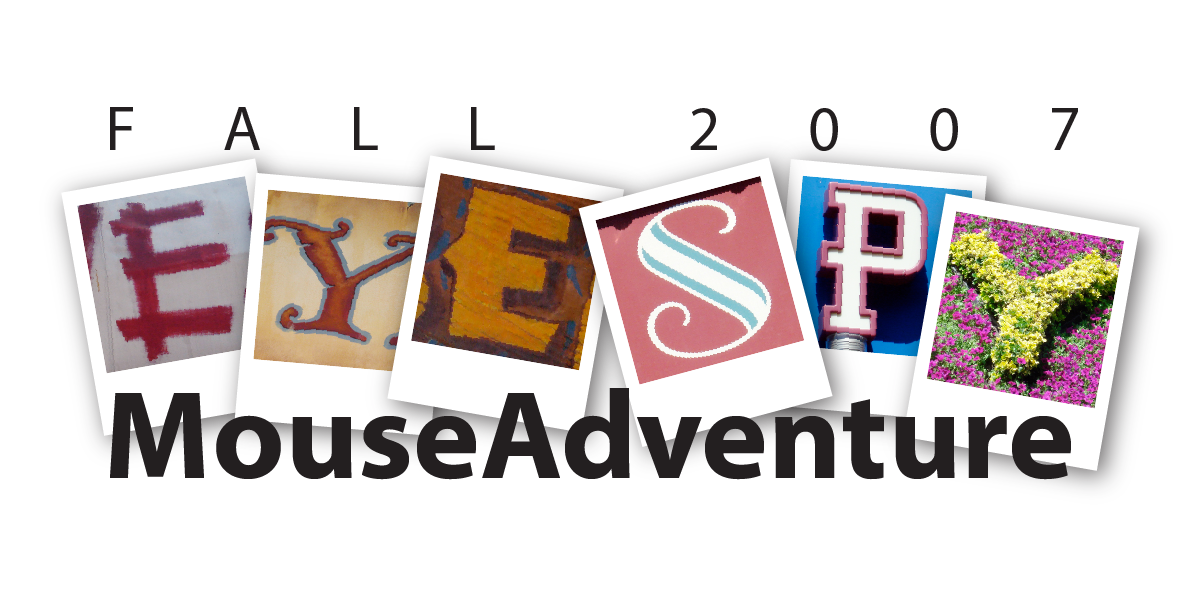